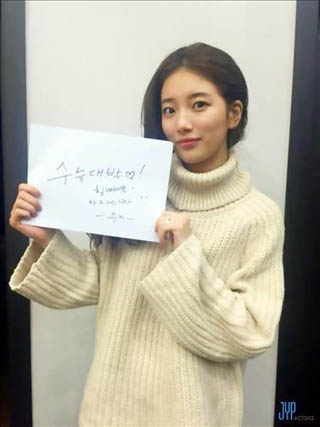 Celebrities uploaded hand-written massages on Wednesday to root for students who are taking the College Scholastic Ability Test today.

JYP Entertainment, which is home to K-pop acts like Miss A and 2PM, posted photos of singer-actor Suzy and Ok Taec-yeon to its Facebook page.

In the photo, Suzy (pictured), a member of the girl group Miss A, holds a message card that reads, “Hope you will excel on the test.”

Singer-actor Ok, a member of the boy group 2PM, holds a similar message card in another photo.

A-Cube Entertainment, which represents Apink member Jung Eun-ji, also uploaded a photo of Jung holding a sketchbook with the hand-written messages: “You must be so nervous, but don’t freak out. I believe you will get through it.” Lately, the singer is appearing in the drama series “Sassy, Go Go.”

Singer-actor Park Hyung-sik, a member of the boy group ZE:A, uploaded a photo of himself to his Instagram account and wrote, “I hope you will reap good results because you have been trying hard.”

Meanwhile, a slew of K-pop singers are taking the test today. Yugyeom of Got7, Yuju of GFriend and Chaewon of April will take the test, which takes nearly eight hours to complete.
By Sung So-young