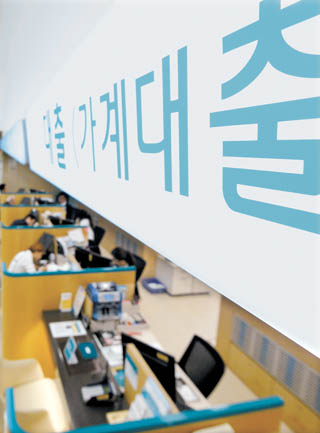 A loan counter at a bank in Seoul on Wednesday. Household loans borrowed from banks reached a new record according to the Bank of Korea. [NEWSIS]

Fresh loans borrowed by Korean households grew at a record rate last month as borrowing rates remain at historic lows and the property market was upbeat.

But the biggest monthly increase in loans in six months deepened concerns over financial risks when the market expects the U.S. Fed to hike interest rates next month.

Mortgages accounted for a majority of the household loans, growing nearly 7 trillion won, which is the second biggest hike ever. The record was in April when 8 trillion won in mortgages were taken out. 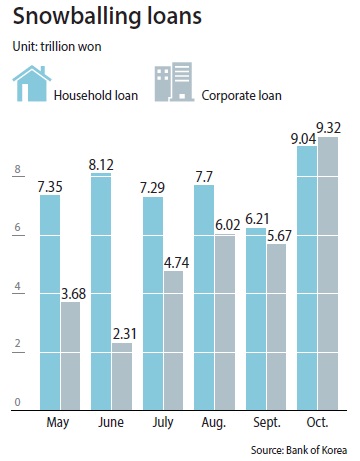 The central bank blamed a positive real estate market for the increase in mortgages. Both fall and spring are high seasons for Koreans to relocate, and many purchase new homes in those seasons.

According to the central bank, 11,700 apartments were sold in October, which is an increase from 9,100, or 29 percent, from September. The number of apartments sold last month exceeded the average sold during the same month between 2006 and 2014, which was 7,500.

Companies took out a total of 9.32 trillion won in loans in October. This is the biggest monthly amount in nearly a year and a half. The last time corporate loans borrowed from banks were that large was in April 2014, when they totaled 9.6 trillion won.

The total outstanding loans that conglomerates owe banks amounts to 168.8 trillion won, while those owned by SMEs stands at 560.8 trillion won.

The central bank said the significant increase of borrowing by companies resulted from funding needed for mergers and acquisitions as well as loan extensions.

Last month, 2 trillion won of fresh loans were taken out of unsecured credit lines by households. This was the biggest amount since May 2010 when 2.7 trillion won was taken out. The BOK cited the Chuseok holidays and Korea’s own Black Friday as the main cause.

The Korean government is trying to rejuvenate the struggling economy by encouraging consumers to spend. It held a large-scale Black Friday sales event last month.

The Finance Ministry estimates that the leading 22 companies that participated in the consumer event enjoyed a 20.7 percent increase in their revenues compared to the same period a year earlier, or 720 billion won. This could contribute to raising the nation’s gross domestic product (GDP) by 0.1 percentage points in the fourth quarter compared to the third quarter.

While the spending could contribute to economic growth, there are concerns that household debt burden has gone up with it. Unsecured credit lines are usually used by households to be spent on necessities, and a sudden increase is a generally worrying sign of the state of the economy.

In fact the continuing expansion of household debt including credit card purchases, which has been enjoying a steep rise since exceeding the 1,000 trillion won mark in 2012, has been considered the biggest risk in the financial market. An ongoing corporate restructuring by the government is part of a preemptive effort to downsize debt risks.

Household debt as of second quarter already reached a new record of 1,130 trillion won and analysts suspect it has exceeded the 1,200 trillion won mark.

The market is already betting the Korean central bank will raise borrowing rates once the U.S. raises its next month.

The yield on Korean 3-year treasuries, which hit bottom at 1.568 percent at the end of September, has been rising ever since. At the end of last month it went up to 1.657 percent. On Wednesday the yield on treasuries was 1.8 percent. Analysts are warning that once the central bank starts normalizing the borrowing rate, it could lead to insolvencies of household debt, which could deal a body blow to the economy.