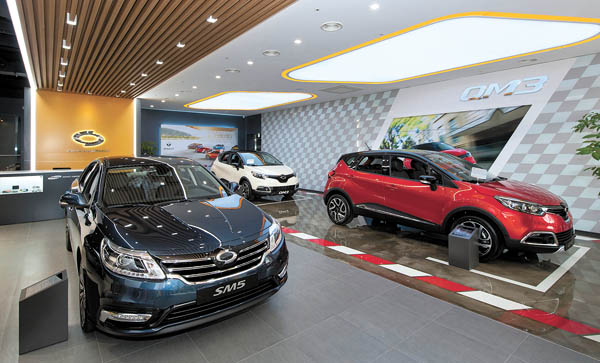 Cars offered by Renault Samsung Motors, including the QM3 SUV, right, on display at a showroom in Bundang District, Gyeonggi, on Wednesday. [RENAULT SAMSUNG MOTORS]

Renault Samsung Motors (RSM) is rolling up its sleeves to boost sluggish sales in the Korean market. One of the key strategies announced by the nation’s fourth-largest automaker is to emphasize the identity of its mother company, Renault, to give its cars more of an imported feel.

At a press briefing at RSM’s showroom in Bundang District in Gyeonggi on Wednesday, executive vice president Park Dong-hoon announced plans to revamp showrooms nationwide and to improve after-sales service.

One of the big changes is that the automaker will adopt a new Shop Identity (SI) for its showrooms. Instead of blue, which is widely known as Samsung’s brand color, it will feature more yellow on signs and main entrances. Yellow represents French automaker Renault’s brand identity. The company said the changes will be implemented in 70 of 188 showrooms nationwide by the end of the year and all showrooms will have the new SI by 2017.

“Next year will be the company’s new beginning,” Park said. “We will try something new in everything - showrooms, products, marketing and sales - in order to meet consumers’ growing expectations.” 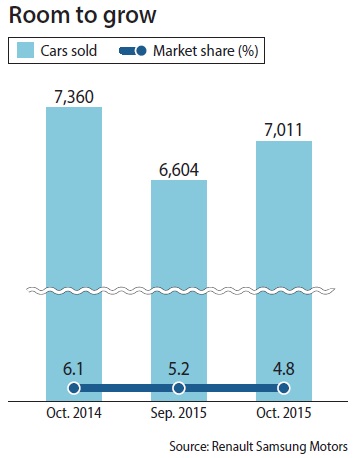 Strengthening the mother brand’s identity was done by GM Korea, and its boosting of the Chevrolet brand has produced a big hit with the large-size Impala sedan. Korean buyers know that the cars are sold by GM Korea but imported directly from the United States.

RSM also sells cars like the QM3, a small SUV that is manufactured in Spain, and wants to make local consumers feel like they are buying a quality import. Foreign automakers like BMW and Benz are considered premium brands in Korea.

The new strategy follows sluggish sales. RSM sold only 7,011 units in October, a 4.7 percent drop from a year earlier. A more serious problem is market share, which only marked 4.8 percent last month, the lowest among all five local automakers and lower than the nation’s smallest automaker, Ssangyong Motor, which hit 6.8 percent last month thanks to its new SUV Tivoli.

Ssangyong sales increased 83.5 percent last month from a year earlier, or from 5,455 to 10,008 units. Market share for RSM was 5.5 percent last year, while the figure for Ssangyong was 4.7 percent.

The company also said it will provide an information desk at the entrances to showrooms so customers don’t have to wait for a salesman, a first among local automakers.

It will also provide a separate space where a salesman and potential buyer can discuss a deal. Such discussions were previously done on a table in an open area.

“We are working on re-arranging interior spaces at showrooms and providing service education programs for dealers to improve the overall service,” Park added. “We want our customers to feel like they are being served appropriately when they visit.”