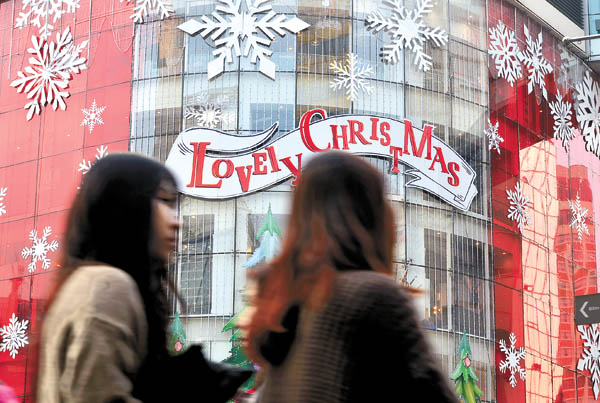 The exterior of a major department store in central Seoul is decorated with Christmas lights on Wednesday. Retailers are rushing to deck the halls with Christmas trees and ornaments. One of the first retailers to get in on the holiday season act was Galleria Department Store in Apgujeong, Gangnam District, southern Seoul. The department store illuminated its Christmas decorations with the theme “Fly me to the Christmas” on Nov. 5. Since last Sunday, Lotte has been holding a parade not only at the intercity amusement park Lotte World in Jamsil but also at the Lotte World Tower. The jewelry company Tiffany & Co. decorated the hall of Hyundai Department Store’s recently opened branch in Pangyo, Gyeonggi, with its own white and blue Christmas tree that was unveiled on Tuesday. [NEWSIS]