After training alone, Olympic skater Lee gets back on ice

After training alone, Olympic skater Lee gets back on ice 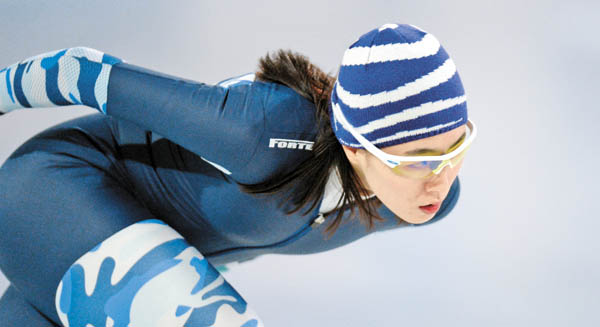 Speed skater Lee Sang-hwa practices during the national team selection trial in Seoul on Oct. 29. Lee will race in the ISU World Cup this weekend. [newsis]

Olympic gold medalist speed skater Lee Sang-hwa has been trying to get in shape ahead of the new season of the International Skating Union (ISU) Speed Skating World Cup, but this time, she didn’t train with the national team.

After attending the national team’s welcoming ceremony at the Taereung National Training Center in Seoul on Nov. 2, Lee departed to Canada later that day to train for the season’s first World Cup event, which starts today in Calgary, Canada.

While rest of the national squad’s skaters had been training together at the Taereung National Training Center, Lee decided to train alone in Canada, where former Korea speed skating team coach Kevin Crockett resides.

The rest of national team left for Canada on Saturday.

Lee, who also won gold at the 2010 Winter Games in Vancouver, Canada, has had a tough time since defending her Olympic title last year in Sochi, Russia. Suffering from knee pain and a cold, she ended her season in February and went to Canada three months later. There, she reunited with Crockett, who had coached her from Sept. 2012 until Sochi.

“Crockett gives me confidence,” Lee said in her previous interviews with JoongAng Ilbo. “He is like a good friend of mine.”

At first, language and cultural differences made training in Canada difficult. But the 26-year-old never gave up, focusing on a training program that would help her lose weight as she rehabilitated her knee.

“It was fun to train with new people in different environment,” said Lee, who holds world record in the 500-meter race at 36.36 seconds.

Lee’s training in Canada has been promising. Though she was disqualified after the national team selection trial on Oct. 28 for removing her armband during the 500-meter competition, Lee marked 38.52 seconds in first race and 38.39 seconds in second race. This was slightly better than her record in last year’s trial which she marked 38.83 seconds and 38.88 seconds.

Despite the disqualification, Lee was selected as a national team member on the recommendation of the KSU. The Korea National Sport University graduate will also compete in women’s 1,000-meter race after finishing first in the national team selection qualifiers.

Since Lee opted not to practice with the national team, there have been rumors of friction in her relationship with the current coaching staff. However, both Lee and the KSU denied the speculation.

Some people suggest that Korea should create a better environment for top speed skaters to train. Currently, the ice rink inside the Taeneung National Training Center is the only international standard 400-meter track in the nation. In addition, Lee still hasn’t found a local club to sponsor her training.