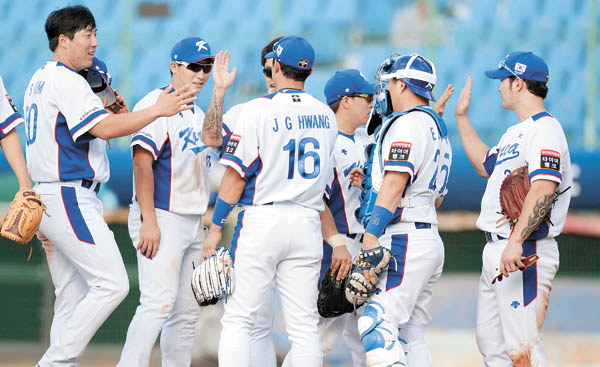 Hwang Jae-gyun, center in the No. 16 jersey, and Korea national baseball team players celebrate after their 13-2 victory against Venezuela during a Premier 12 tournament game held at Taoyuan Baseball Stadium in Taoyuan, Taipei, on Thursday. Korea is now 2-1 in the tournament. [newsis]

At Taoyuan Baseball Stadium in Taipei on Thursday, Korea had the first called-off victory in this inaugural baseball tournament. Under the rule from World Baseball Softball Confederation - which is running the event - if one team leads the opponent by 15 runs after five innings or 10 runs after seven innings, the leading team is automatically rewarded with the win.

The national team, led by manager Kim In-sik, didn’t have good start to the tournament, suffering a 5-0 defeat to Japan on Sunday.

But Korea, ranked eight in the world, has certainly turned the tide after its 10-1 win against the Dominican Republic on Wednesday and another big win against world No. 10 Venezuela on Thursday.

Korea is scheduled to face Mexico on Saturday and the United States on Sunday for their remaining games in Group B. The top four teams advance to the knockout round, and manager Kim has previously said the team needs at least three wins to reach the next round.

After facing the Dominican Republic on Wednesday night, Korea had only 13 hours rest since the game against Venezuela was played at 12 p.m., local time.

“In baseball, you can win with big scores or low scores,” said manager Kim. “Today, we were able to score a lot as our offense exploded from the start.”

Hwang, who was silent in his previous five at-bats this tournament, went 4-for-4, including two home runs, to collect 3 RBIs. Playing as third baseman and seventh batter in the lineup, the 28-year-old bashed solo-shots in the fourth and fifth.

Hwang, who made his pro debut in 2006 with the now-defunct Hyundai Unicorns, declared that he wants to play in the Major League Baseball next season through the posting system, but the Giants decided to give priority to teammate Son Ah-seop.

Only one player from the team can go to overseas at a time. The Giants said Son, who went 1-for-4 with one RBI against Venezuela, will be posted next Monday.

Hwang can get the opportunity only if Son fails to ink a contract.

In defense, starting pitcher Rhee Dae-eun, who plays for Chiba Lotte Marines in the Nippon Professional Baseball, also made an impressive national team debut. The 26-year-old got six strikeouts in five innings, although he allowed two runs with a solo home run to Juan Apodaca in the third.

Manager Kim said that the team will get a full day of rest today. Players like Lee Yong-kyu and Min Byung-hun are already sidelined for fatigue and injury.