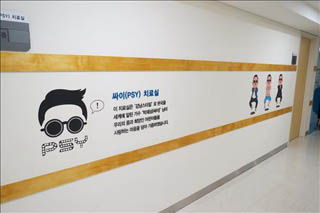 “Gangnam Style” star Psy donated 500 million won ($431,000) to Yonsei University Severance Hospital about a year ago, which was used to make a treatment room for children who need psychotherapy and language therapy.

The 38-year-old singer’s good deed became public on Thursday as the hospital shared the news with the press.

According to the hospital, located in Sinchon-dong, central Seoul, the new treatment room is named Psy Treatment Room and opened last November. About 5,000 children have visited the treatment room so far.

Psy previously said he would donate all proceeds from “Gentleman,” released in April 2013, to return what he has received from local music fans, and he later decided to give 500 million to young patients.

It has been reported that autistic children and children with ADHD usually visit the Psy Treatment Room. Outside the room, messages are written on the wall noting the singer’s donation.

Meanwhile, the singer will release a new album on Dec. 1, two years and eight months after “Gentleman.”

The singer will also hold concerts from Dec. 24 to 26 under the title of “All Night Stand,” an annual concert he has been organizing since 2003.