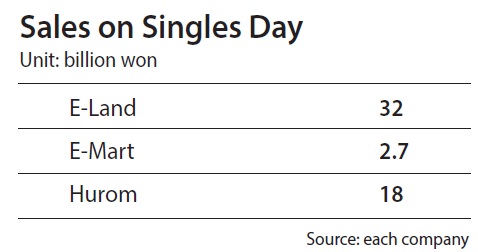 ICB, the local agent of Alibaba’s courier service Cainiao, said it handled a record 500,000 parcels for orders made during this year’s Singles Day. They were sent from Korea to China. There were no combined figures for sales of Korean products, ICB said.

But some of the companies that participated in Singles Day promotions said their sales surged between 40 and 50 percent compared to the same day a year earlier. Some companies saw their inventories for the day sell out.

This demonstrates the growing popularity of cross-border e-commerce and the spending power of Chinese consumers. Major retailers have set their sights on the China market as sales at department stores and big supermarket chains remain stagnant.

Tmall Global features foreign brands and allows merchants around the world to offer products to Chinese consumers without the need for a physical presence in China.

ICB said that it covers shipping for the majority of Korean retailers on Tmall Global, which include G-Market, Lotte.com, LG Household & Health Care and WeMakePrice.

To handle the massive shipments, the logistics company said it would deploy cargo airplanes.

The courier service provider said Korean companies racked up the third-highest sales after sellers from the United States and Japan.

Combined sales of Korean brands were ranked below 10th place during the previous Singles Day.

With signature brands Teenie Weenie, Roem and Prich, the fashion retailer had promoted discounts of up to 50 percent for the one-day shopping spree.

China is a key market for E-Land, with its Fashion China unit operating more than 7,000 stores nationwide. Its sales surpassed those in Korea for the first time in 2013, at 2.15 trillion won, and the company has had average sales growth of 50 percent per year since 2002.

Cosmetics products by Korean beauty makers were some of the bestselling products on Nov. 11.

AmorePacific said its top-selling products sold out and set daily sales records. In less than 30 minutes of the sale commencing, Innisfree, a cosmetics brand of AmorePacific, brought in 1.8 billion won.

The country’s largest cosmetics brand declined to reveal its total sales through the Alibaba site.

Hurom, a juicer maker, sold a total of 45,000 products on Wednesday, raking in some 18 billion won.

Supermarket chain E-Mart threw its hat into the Chinese shopping event this year for the first time and racked up sales of 2.7 billion won, the equivalent of the daily sales of 10 E-Marts in Korea.