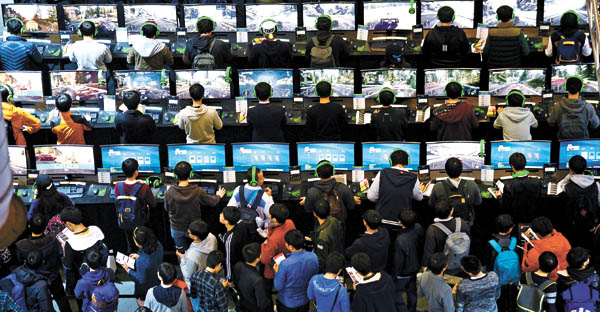 Young visitors try out the latest PC games during the country’s biggest gaming exhibition, G-Star, held at Bexco in Busan on Thursday. This year, 633 companies from 35 countries participated. [NEWSIS]

The 2015 edition of the G-Star gaming exhibition kicked off in Busan on Thursday, with the largest number of participants in its 11-year history.

The four-day international festival at the Bexco convention hall features 633 game developers from 35 countries, many of whom are unveiling new products based on next-generation platforms like virtual reality (VR).

Game developers such as Nvidia of the United States, Sony Entertainment Korea and Tokyo-based Korean developer Nexon are running their own demo zones to let visitors play games that integrate various VR devices.

The second-largest game developer in Korea is operating more than 300 booths, the most of any single company at G-Star.

In total, 140 of the booths are dedicated to online PC games, 100 to mobile games, and 60 to game-related goods and fan art. The developer is also running three special outdoors booths.

Nvidia is showing off games that use the HTC Vive, a head-mounted VR display.

Sony’s booth unveiled its PlayStation 4-powered VR for the first time in Korea. The device has a 5.7-inch OLED display with a high field of view at nearly 100 degrees, as well as an accelerometer and gyroscope to sense motion.

NCsoft’s booth attracted a massive crowd wanting to demo its new online action role-playing game, Master X Master, which will be released early next year. The company is well-known for its last hit, the online role-playing game Lineage.

NCsoft has set up 40 top-quality computers at the event for loyal fans to get hooked on its newest offering.

Both Samsung Electronics and LG Electronics are also displaying their curved, ultra-HD TVs and monitors at the event. Samsung says the number of people who play games using Samsung Smart TVs surpassed 4.2 million worldwide as of October, while the number of such gamers was just one million at the beginning of this year.

Twitch, a Korean video streaming site devoted exclusively to game content, will offer a live broadcast of the game fair through Sunday.