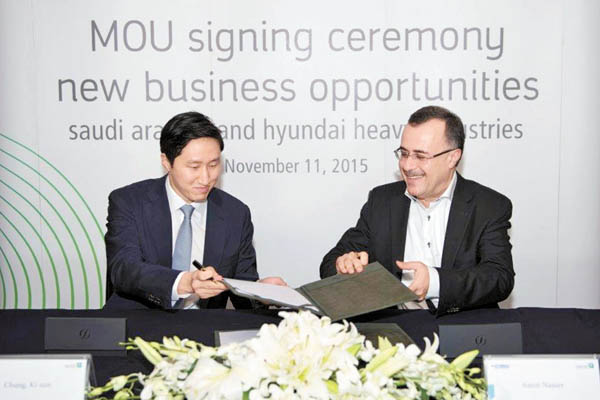 Hyundai Heavy Industries (HHI) has been desperate to break its financial slide, but things may be looking up thanks to a new agreement with a Saudi Arabian company.

The nation’s top shipbuilder said Thursday it signed a memorandum of understanding with Aramco, a state-run oil company in Saudi Arabia, promising cooperation in shipbuilding, engine development and plant businesses.

Executives on both sides, including Chung Ki-sun, head of corporate planning at HHI, and Al Nasser, CEO of Aramco, signed the agreement at the Saudi company’s headquarters. Aramco produces 15 percent of the world’s crude oil and is also widely involved in oil transportation, marine engineering and plant construction.

Becoming Aramco’s partner will benefit HHI in several business sectors, and will also expand its presence in the Middle Eastern market.

HHI will first cooperate with Aramco to jointly build a dockyard in Saudi Arabia, in which other local companies like a state-run Bahri will also participate. HHI will earn more chances to win shipbuilding contracts in Saudi than other international rivals, including companies based in China. Since the two will also be jointly working on developing engines for vessels, HHI is expected to earn chances to sell its in-house engines and offer after-sales services to the Middles Eastern market.

The two companies will also work together in the plant construction business. Since most of HHI’s plant-focused businesses were already in the Middle East, the company expects to expand its share even more, reducing potential risks on large-scale construction projects by getting financial support and manpower from Aramco. The two also agreed to expand its cooperation in the oil refining sector.

HHI has been trying to build up this partnership with Aramco for nearly seven months as part of its efforts to create growth engines at a time when the company has been reporting billions of losses for eighth consecutive quarters, mainly due to struggles in its offshore plant businesses.

HHI received a visit in March from Al Falih, the president and CEO of Aramco, who is also the minister of health in Saudi Arabia.

Sensing an opportunity, HHI’s head of corporate planning, Chung Ki-sun, quickly formed a team to focus on developing the partnership.

“In 1976, Hyundai Group was able to make a big growth by successfully finishing building the Jubail Commercial Port in Saudi Arabia, which was the biggest port in the world at that time,” said Chung. “Building this partnership will be a huge opportunity for the two countries to open up a new chapter in shipbuilding and plant businesses. ”

An HHI spokesman was cautiously optimistic.

“It is hard to tell how much profit we would make with this partnership,” he said. [But] we expect our shipbuilding business to be revitalized.”