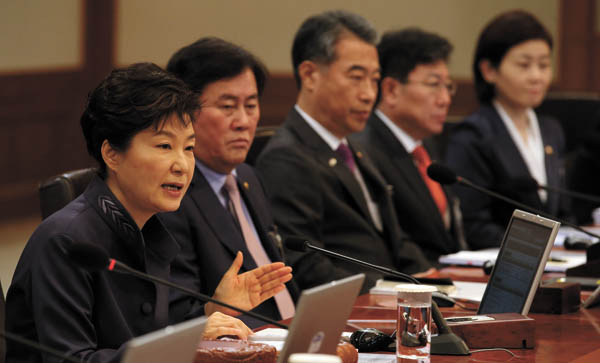 In opening remarks during a Cabinet meeting, President Park Geun-hye on Tuesday urged the public to vote for “sincere” politicians in the April general election. During talks, Park sat in line with Deputy Prime Minister for Economy Choi Kyung-hwan; Interior Minister Chong Jong-sup; Industry Minister Yoon Sang-jick; and Kim Hee-jung, the minister of gender equality and family, who plan to run in the legislative elections. [Joint press Corps]

The president’s appeal to the public to vote for “sincere” politicians in April’s general election stirred up a strong reaction from the main opposition party, while her adversaries inside the ruling party issued muted criticism and refrained from escalating tensions.

In opening remarks during her Cabinet meeting Tuesday, President Park Geun-hye lashed out at the legislature for failing to pass bills vital for the economy and asked the voters to pass their judgment on lawmakers at the polls.

“Now, it’s the people’s turn to make the National Assembly … resolve issues that directly concern the public,” she said. “I appeal to the people that only those who are sincere should be chosen in the future.”

While the National Election Commission (NEC) said Park’s remark, like her appeal in June that the people pass judgement on the “politics of betrayal,” is not a violation of the election law, which requires political neutrality from a public servant, the main opposition New Politics Alliance for Democracy (NPAD) claimed the president was campaigning for her supporters.

“It is a blatant campaign for her people,” NPAD Chairman Moon Jae-in said Wednesday. “At the same time, it is an overt campaign to unseat opposition lawmakers and her opponents inside the ruling party.”

Moon went on to say that Park should reflect on what her party had done to the late President Roh Moo-hyun. After Roh announced during a press conference that he expected overwhelming support from his party, the opposition Grand National Party, the predecessor to the current Saenuri Party, sponsored and passed a motion to impeach him in 2004.

The Constitutional Court, however, overturned that action.

“Following her request for the people to judge the ‘politics of betrayal,’ Park asked voters to choose ‘sincere people.’ Her habitual election interventions have essentially reduced her position to nomination committee leader for the Daegu districts,” said Rep. Lee Jong-kul, the NPAD floor leader. “Park’s anger management issues are becoming more serious by the day, and the public is losing patience.”

Opposition Rep. Ahn Cheol-soo also posted a message on his Twitter account citing that the president was only “concerned about securing jobs for her loyalists, not young people.”

Another senior NPAD lawmaker, Park Jie-won, noted that the ministers, vice ministers, presidential secretaries and public company leaders in the Park government were seeking nominations one after another.

“So who will cover those vacancies in the government?” he asked.

But despite the outcry from the opposition over what they claimed were the president’s attempts to influence the election, Saenuri Party Chairman Kim Moo-sung remained quiet.

Kim has advocated nomination reform within the ruling party to end its practice of placing high-profile politicians in districts they know they can easily win.

The chairman has been outspoken about adopting an open primary system, although the party’s nomination rules have yet to be decided.

But while Park’s loyalists defended her statements, her adversaries within the Saenuri Party did little to hide their irritation, though still only issued muted criticism rather than directly attacking the president.

“For the people to hand down judgment, there should be no strategic nomination orchestrated by a particular person,” Rep. Choung Byoung-gug, a four-term lawmaker, said during the party’s meeting of senior leaders on Wednesday.

He subsequently urged the party to resume discussions on introducing open primaries to field all candidates through an internal vote.

Saenuri Rep. Park Min-shik also criticized the president’s allies for only paying attention to the election. “All her former and current ministers and presidential secretaries are [intending to run in the] elections,” said Park. “So who’s going to attend to state affairs?”