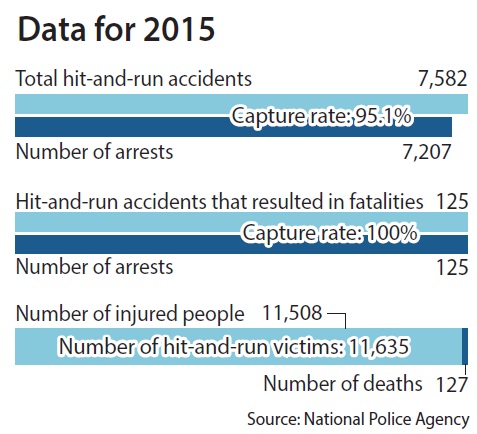 Of the 125 hit-and-run accidents from January to October that resulted in deaths, all the perpetrators were captured, the National Police Agency said Monday.

The rate of criminal apprehensions for hit-and-run accidents that resulted in death during the same period last year also stood at a high record of 97.4 percent - 150 cases out of a total 154 were resolved.

“We had a 100 percent success rate [this year] in solving hit-and-run accidents because we enacted countermeasures during the early stages of the accidents by mobilizing all available police forces,” said an official from the National Police Agency.

According to authorities, some 140,000 CCTV cameras are currently installed countrywide that use one of two security systems.

One automatically recognizes a car’s license plate number, while the second is used to prevent crime by automatically determining a car’s location through a retrieval system.

Black boxes, installed inside vehicles to record events and other data, have also recently begun to play a bigger role in solving hit-and-run cases.

Cumulative sales for black boxes reached 2.69 million as of last year, according to the Ministry of Land, Infrastructure and Transport. And with some 2.8 million CCTV cameras and black boxes in operation on the road, nearly every car in commission is accounted for.

“Securing footage from CCTV cameras and black boxes have become just as important as witness accounts in figuring out hit-and-run accidents,” said Im Chul-moon, who works at the police precinct in Buk District in Gwangju, South Jeolla.

Even a 1 centimeter (0.39 inch) scratch can serve as a major clue in determining fault in hit-and-run accidents if CCTV cameras are installed nearby.

Police in Gangjin County, South Jeolla, were able to catch and apprehend a hit-and-run suspect last month by collecting white paint scraps found at the scene. Operating on the assumption that the driver had been operating a white vehicle, they narrowed down a possible suspect by measuring the width of the skid marks, and finally analyzing CCTV footage. It took just 13 hours for the police to apprehend the driver.

The apprehension rate for general hit-and-run accidents in addition to hit-and-runs that cause fatalities has also markedly improved compared to last year.

Of the 7,582 hit-and-run accidents that occurred from January to October, 7,207 assailants were arrested - a 95.1 percent capture rate, or 4.5 percentage points higher than last year.