Sewol captain is a murderer: court

Sewol captain is a murderer: court 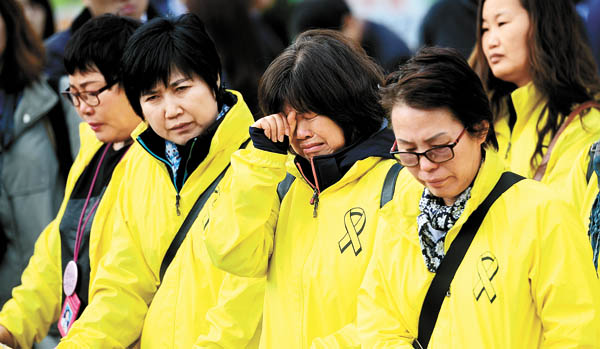 Grieving relatives of Sewol ferry victims hold a press conference on Thursday after the Supreme Court upheld an appeals court’s convictions of the ferry captain and crew, who abandoned the ship without helping people evacuate. [NEWSIS]

The Supreme Court on Thursday upheld a life sentence for the captain of the Sewol ferry, finding him guilty of murder for fleeing the capsizing ship before more than 300 of its passengers drowned.

The final ruling on 70-year-old Lee Jun-seok came a year and a half after the 6,825-ton ferry sank off southwestern waters on April 16, 2014, becoming the country’s worst maritime disaster in history. Only 172 people survived. Most of the 304 who died were high school students on a field trip to Jeju Island. The remains of nine people are still missing.

Supreme Court Chief Justice Yang Sung-tae said Lee’s abandonment of the ship had “disabled” passengers’ chances of escaping. It was “no different from drowning the passengers” on his own will, Yang said, which has “the same legal meaning as murder.”

Lee was convicted of murder by an appeals court and sentenced to life imprisonment.

“A whole lot of passengers could have escaped the ship and survived had there been a timely evacuation order,” the chief justice said. “Instead, Captain Lee Jun-seok ordered passengers to stand by and embarked on a Coast Guard patrol boat to leave the site.”

It is the first time in Korea that the Supreme Court convicted a person of murder for nonfeasance in a large-scale human disaster.

Punishments for 14 other crew members who escaped the Sewol with Lee were also upheld, with terms ranging from 18 months to 12 years for negligence of duty. The prosecution had indicted three others for murder, but the appeals court acquitted all three on that charge.

Among those three, Chief Engineer Park Gi-ho, 55, had received a 10-year jail term in an appellate trial in April for involuntary manslaughter by neglecting his duty. In the original trial in November 2014, he was convicted of murder after leaving two injured crew members behind and was sentenced to 30 years.

Captain Lee was originally sentenced to 36 years in prison, with the lower court acquitting him of a murder charge. He was found guilty of involuntary manslaughter and gross negligence of duty for abandoning the ship, with judges saying he had no intention to kill the trapped passengers. That ruling was quashed in April when the appeals court found him guilty of murder.