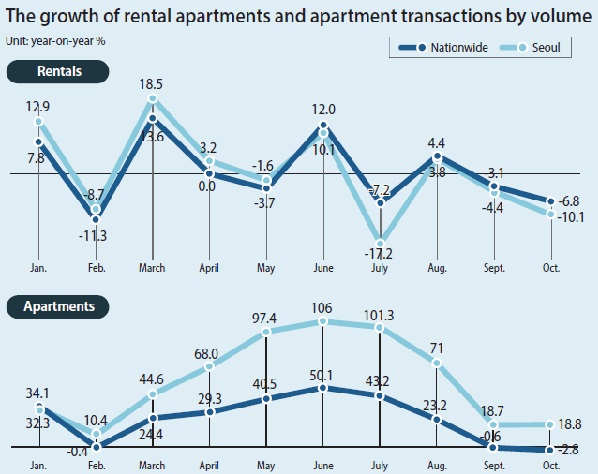 The property market gained momentum after the central bank lowered the key interest rate in the second half of last year, but it now seems to be losing steam - especially on the pre-sales of soon-to-be-built apartments.

According to the Korea Financial Telecommunications and Clearings Institute, among the 14 apartment projects that accepted applications for potential homebuyers in the greater Seoul area this month, only two found buyers for all their units in the first round of sales.

This is a stark contrast to last month, when 12 of the 25 apartment projects in the same region sold out in the first round. 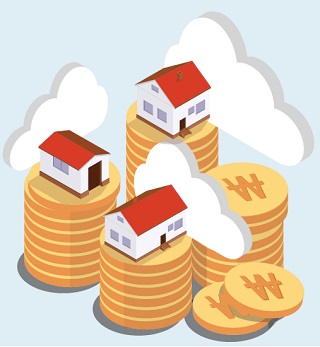 “Apartments complexes that are considered lucrative and popular have already sold out, and since there have been reports of an oversupply [of apartments] recently, presales seem to be fizzling out,” said Chung yeon-shik, vice president of iNEX Housing, which specializes in marketing unconstructed apartment presales.

Some market experts predict the market will become polarized, with only popular locations attracting hordes of homebuyers while the rest struggle.

Signs that the property market is cooling can also be seen in falling housing prices.

According to the Korea Appraisal Board, as of the second week this month, the average housing prices of those purchased grew 0.11 percent compared to the previous week. Though still an increase, its acceleration rate has slowed compared to the first week, when it saw 0.14 percent growth, and the final week of last month, when it was up 0.13 percent.

Moreover, the number of jeonse (lump-sum deposit) and monthly rental apartments has fallen 6.8 percent compared to the same period a year ago. The Korea Appraisal Board said in its analysis that the recent surge in apartment prices, as well as an oversupply of units, seems to have discouraged homebuyers from making purchases.

“We are at a point where homebuyers are feeling the burden of purchasing prices,” said Kim Se-gi, in charge of real estates statistics at the Korea Appraisal Board. He added that in the past month, many people who were previously living on long-term or short-term rental contracts have purchased their own apartments, which explains the drops in new contracts.

However, some say the current situation will only be short-lived.

“Unlike in the past, the apartment market this year has been active even during the summer, which is generally an off-season. We’re seeing a [temporary] breather because of that,” said Noh Jae-pil, a realtor in Seoul’s Nowon District. “As jeonse prices show no signs of falling, it is likely that after the end of the year, housing prices will once again see a significant increase.”

But while much of the country is seeing falls in both the prices of apartments as well as the number sold, Seoul continues to maintain strong growth.

Jeonse prices in Seoul saw a 0.31 percent increase in the second week of this month compared to the previous week. In contrast, the average increase in jeonse prices nationwide increased 0.16 percent during the same period.

During the same period, overall apartment prices in Seoul grew by 0.18 percent, while the country’s overall price growth was 0.11 percent.

One sector seeing particular interest is apartments in buildings soon to be torn down and rebuilt, thus guaranteeing a brand-new home after construction is finished. This has become particularly popular in the upscale Gangnam District. In one case, a 41 square-meter (441 square-foot) apartment in a building waiting to be reconstructed in Gaepo-dong saw its selling price rise 20 million won ($17,000) this month alone, to 800 million won.

“We’re getting consistent inquiries for apartment buildings in Gangnam awaiting reconstruction,” said a relator in the area, who requested anonymity.

He said the popularity was largely due to a lack of apartments in Seoul.

“This year and next year, there will be around 20,000 new apartments in Seoul,” said Park Hap-soo at KB Kookmin Bank’s private banking center in Myeong-dong, central Seoul. “That means the ratio of apartment supply to demand will be low.”

He added that the lack of apartments will also push up the prices of jeonse homes next year, which will be exacerbated by the current homeowners who will have to find new accommodations due to their apartments being under construction.

The government has been trying to solve the situation with its New Stay apartments, which offer cheaper long-term rents. However, there are not enough of these options available immediately to meet demand.

The remaining variables will be the U.S. Federal Reserve’s monetary policy and the government’s regulation of loans.

The government is also closely monitoring group lending by homebuyers, in which a group of people purchase a presale unit in an apartment complex with a lower interest rate by putting the apartment up as collateral.

Once the government regulates loans, it could cool the demand for apartments in Seoul, particularly in Gangnam District.