Residents vote ‘no’ on nuclear

Residents vote ‘no’ on nuclear 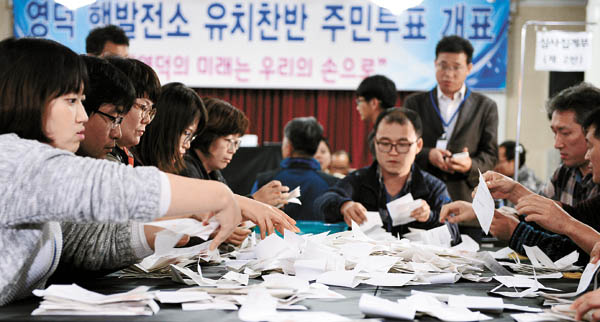 Organizers of a referendum asking Yeongdeok County, North Gyeongsang, residents whether the government should be allowed to build a nuclear reactor there open up a ballot box on Friday. [NEWSIS]

The government’s plan to boost nuclear power in its energy mix in the coming 15 years is facing another obstacle, as residents of Yeongdeok County, North Gyeongsang, expressed strong opposition to new reactors being constructed near their homes.

However, the government is firmly sticking to its plan to construct two new reactors, saying the voluntary referendum doesn’t hold legal validity, because the referendum this time failed to meet the requirement of participation by more than one-third of all eligible voters.

“I would like to express my regret, as the minister in charge of national energy policy planning, at seeing the region facing internal division and conflicts,” said Minister of Trade, Industry and Energy Yoon Sang-jick at a press conference Friday morning at the Sejong Government Complex. “However, the referendum this time is neither legally valid, nor does it hold legal efficacy; therefore, the government cannot accept the voting result.”

The Yeongdeok referendum held this week reflected the opposition to nuclear power, but ended up failing to meet a requirement in order to hold legal sway. Under the Korean Residents’ Voting Act, referendum results can be legally recognized only when more than one-third of the qualified voter population participates.

Of the 34,432 eligible voters in Yeongdeok County, only about 32.5 percent actually cast their ballots on Wednesday and Thursday, with 91.7 percent saying no to nuclear reactors, according to the results released by the committee Thursday night.

In addition, the Energy Ministry has insisted that the vote itself holds no legal ground, saying that any central government policy is not subject to referendum.

The ministry has also argued that going ahead with construction in Yeongdeok is legally valid, because the central government moved forward the project after the county’s council submitted an application to attract new nuclear units back in 2010, with a petition letter signed by residents.

On the other hand, some 33 liberal lawmakers announced earlier this week that they support the referendum, writing in a statement that “the referendum is legal in a sense that everyone in this country should be equally able to express their decision to pursue their safety and health.”

“The right to referendum is guaranteed to everyone by the Constitution and the Resident Voting Act, to allow people to make their own decisions on matters happening in their local government, based on the self-governing system of municipalities,” said Kim Yeong-hee, a lawyer and legal adviser to the committee.

The conflict between the central government and residents came to a head in late October, when local environmentalists, social activists, residents and some regional politicians in North Gyeongsang announced plans to hold a referendum.

The committee insisted that the Yeongdeok local government made the decision to bring in nuclear power to boost the regional economy unilaterally, without enough discussion with the residents - no public hearings or referendum so far. The committee also pointed out that the Yeongdeok County council’s petition letter only had 400 signatures, which it says is too few to represent all residents.

The Energy Ministry has planned to build two nuclear reactors by 2029, either in Samcheok in Gangwon or in Yeongdeok County, as part of its latest medium-term electricity supply plan announced earlier this year. Residents of Samcheok had a similar reaction last year, with nearly 85 percent voting “no” on the nuclear plants.

Despite residents of both constituencies holding voluntary referenda, the ministry said at a press briefing held last Thursday that it has no intention of withdrawing the construction plan.

“The government will acknowledge that there are some Yeongdeok residents who are against the nuclear power plants,” Yoon added, and promised that the Energy Ministry will organize a communications committee with the Korea Hydro and Nuclear Power Corporation and county resident representatives.