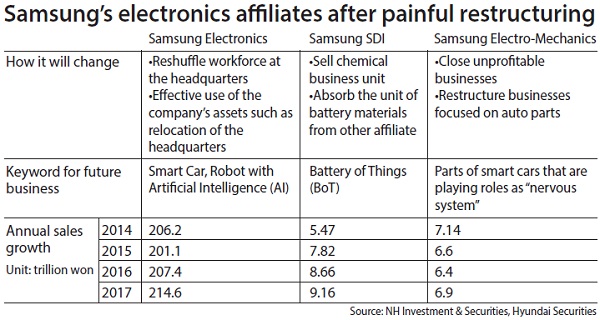 The move comes after a series of dramatic changes at Samsung Group, including an internal restructuring, the relocation of its headquarters and a reshuffle of top executives.

Samsung Electronics has fast-tracked the development of a device that acts as a “brain” for smart cars and robots with AI, according to reports by analysts in Seoul.

Industry insiders in Korea forecast the global smart car market will expand to $274 billion by 2017.

Since finishing the relocation of its headquarters from Gangnam District to Suwon, Gyeonggi, Samsung Electronics is also expected to be focusing on the development of robots with AI, market analysts said.

That will involve recreating the functions of the human brain by further developing technologies from application processors to DRAM and NAND flash memory chips.

One offshoot of this work is the so-called Mongoose Project. So far, Samsung Electronics has been heavily dependent on overseas rivals like Apple and Intel for its application processors’ core. As part of the Mongoose Project, the company is working on developing its own versions of the technology, ultimately creating a better version than that offered by its competitors. The company is making progress, industry insiders say, raising expectations that Samsung’s own core will finally be released in December as part of the forthcoming Galaxy S7.

Another key area is the development of next-generation batteries.

Samsung SDI, which recently sold its chemical unit to Lotte Group, is planning to increase its battery production tenfold by 2020 with a 3 trillion won ($2.5 billion) investment.

“Our resources are fully concentrated on developing a battery for automobiles,” said Kim Ik-hyeon, an executive at Samsung SDI. “The profits from selling off our chemical unit will be spent on developing the auto battery business.”

The company has coined the phrase “Battery of Things” to explain its initiative.

Samsung SDI has said that if everything is connected through the Internet of Things in the future, there will need to be a parallel Battery of Things to support the system.

The company points to predictions about the future prevalence of AI robots, which it says will require their own advanced batteries.

“We have developed technology to create ‘flexible batteries,’ which can be rolled for use in various devices, from automobiles to drones, robots and any number of new devices in the future,” an employee at Samsung SDI said.

Other affiliates are more narrowly focusing on futuristic smart cars.

Samsung Electro-Mechanics, which recently closed several of its unprofitable businesses, will focus on developing state-of-the-art auto parts that can act as the “nervous system” in smart cars. Samsung Electro-Mechanics says these cars will be reliant on next-generation multi-layer ceramic capacitors (MLCC), which it is working on developing. The market for MLCCs was around 1.2 trillion won last year, but is expected to reach 2 trillion won within five years with the growth of electric cars, the company said.

“The business of automobile cameras, which is playing the role of the eyes for smart cars, also has great potential for growth,” an employee at the company said. “Several functions could be added, such as a sensor to detect lanes and avoid barriers to prevent car accidents, for a self-driving vehicle.

“By 2020, we are aiming to expand our business to developing a module for a camera system at the core of self-driving cars.”