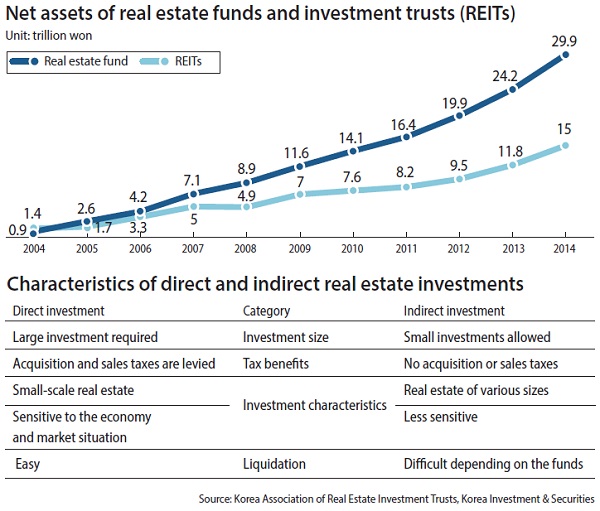 A 63-year-old surnamed Lee had long been interested in directly investing in a small to midsize commercial building.

But when he finally visited the private bank of a brokerage firm, he was advised to instead make an indirect investment via a real estate investment trust (REITs) or a global REITs fund.

One of the bank’s employees told him that with the 1 billion won ($858,000) he planned to invest in property, it would be difficult to purchase a top-quality building with a low vacancy rate, even if he took out a loan from the bank.

One of the benefits of an indirect investment in commercial real estate, the employee said, is that he wouldn’t have to pay taxes on either the purchase or eventual sale of the building.

“I was visiting the commercial districts in Bundang and Pangyo [Gyeonggi] in hopes of investing in a building that would provide a stable income,” Lee said. “But I have decided to hold back on the idea of buying the building directly.”

Like Lee, many here in Korea have become interested in investing in commercial properties, which has led to strong growth in indirect investments.

Since 2004, the fund has been enjoying an average annual growth of 42 percent.

One of the biggest reasons commercial real estate investments have been growing at such alarming rates in the last decade is the rapid aging of Korea’s society at a time when interest rates are at an all-time low, leading to pension funds looking for ways to rapidly increase their returns.

The supply of commercial buildings has gone up as well. This is largely because as the economy continues to struggle, companies have been putting up their properties for sale.

Since in many of the cases, the companies selling their offices remain as tenants after the sale is complete, they are considered top-class commercial investments.

Although they sound similar, the two are very different. Real estate funds are a collection of investments put into a property itself. Usually, an asset management company that specializes in real estate will create an investment trust-type fund, where the money collected from retail or institutional investors will purchase real estate and the profits will be equally distributed.

In the case of REITs, investors are investing in a company or a union that specializes in real estate development, managing properties or selling and buying real estate.

The company or the union will then generate profits from investing in real estate, and that profit will then be distributed to the investors.

In contrast, listed or public REITs have a low entrance bar for solo investors.