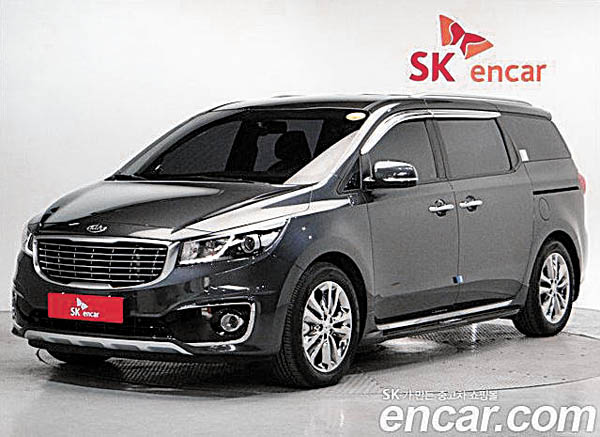 Kia Motors’ Carnival minivan has become the most popular used car in the country.

According to used-car dealer SK Encar on Friday, it only took an average 9.14 days for a 2015 Carnival to be sold once put up for sale on the market, followed by Ssangyong Motor’s Tivoli SUV (13.22 days) and Hyundai Motor’s Tucson ix SUV (17.37 days). The company said it studied sales data from September and October.

“The Carnival is extremely popular, since it only took an average of 15.63 days for 2014 models to be sold,” a spokesman of SK Encar said. “In the nine- to 11-seat minicar market, there are no rivals that can compete with the Carnival.”

Ssangyong’s Tivoli SUV, which has been consistently leading sales for the nation’s smallest automaker since it rolled out in January, is also a popular used option. SK Encar said not many of the units are put up for sale, but demand for the low-price SUV is quite high. Tivoli was once recognized as the best new car by consumers in a July survey conducted by SK Encar.

Other top-selling used wheels include GM Korea’s 2006 and 2007 edition of the Winstom, Kia’s new Sportage and its predecessor Sportage R, indicating that SUVs are still the most favored option among Korean consumers.

Kia’s 2012 K3 was the only sedan included on the list of top sellers, ranked ninth and taking an average of 19.76 days to find a buyer. The K3 was popular among young consumers in their 20s and 30s with an affordable price range of around 10 million won ($8,600).

“In general, months like November and December are slow seasons for the used-car market, but SUVs and minivans attract consumers all year long,” said Park Hong-kyu, a spokesman for SK Encar.