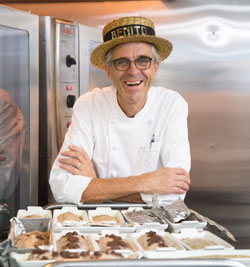 Charcuterie master Benito Plasschaert, who has run his own business for the past 25 years, displays meat products he made himself at the Grand Hyatt Seoul. [Grand Hyatt Seoul]

After the International Agency for Research on Cancer, an institute under the World Health Organization (WHO), announced that red and processed meats like sausage and bacon could lead to health problems, including cancer, the global meat industry and meat lovers worldwide reacted with shock and disappointment.

But Benito Plasschaert, a charcuterie master in pate and cold cuts, insists the finding doesn’t mean people should be quick to shun meat from the table. Rather, they should seek healthier and safer ways to consume meat, he said in a recent interview with the JoongAng Ilbo at the Grand Hyatt Hotel in central Seoul.

Plasschaert is a third-generation charcuterie master and makes handmade ham and meat loaves the traditional way, through salting and smoking.

He has supplied his hams to the royal families and presidents of Belgium, the Netherlands, England and Denmark, and has run his own store in Ghent, Belgium, for the past 25 years.

These days, he also works as a consultant for butchers around the world, passing down his traditional methods.

Still, Plasschaert acknowledged that some processed meats can be dangerous to one’s health due to chemical additives and the ways in which ham and sausages are mass-produced.

“Certainly, there are good factories, but the problem stems from mass production processes,” he said. “Consumers should acknowledge that some factory-made meats or sausages that are too cheap are not good quality. An expensive price tag [is one indicator] that it’s made of quality ingredients in a more natural way.”

Additives like phosphate, a chemical powder that allows the meat to stay bounded, is one such chemical that can be detrimental to a person’s health.

“This substance is not frequently mentioned in the media, but it’s a chemical product that may cause cancer when used too much,” he said. “When factories use low-quality meat, the meat doesn’t bind well. But if you put in phosphate, which is not expensive at all, it makes the meat bind together well.”

Smoked meats can also be hazardous, he said, since many companies use chemically enhanced liquid smoke.

Consumers have to take a closer look at the labels to check the ingredients, Plasschaert advised, as well as check the meat’s texture. A less natural texture means more additives have been added.

He also urged consumers to prepare and make meat at home.

To make a homemade ham, prepare 1 kilogram (2 pounds) of pork shoulder and submerge it in water to soak, he said. Then, add 50 grams of salt, two bay leaves and one onion, and cook at 78 degrees Celsius (172 degrees Fahrenheit) for about two hours.

This homemade ham can last up to two weeks when stored in a refrigerator and up to six weeks if frozen, without additives or preservatives, he added.

Twenty-five of Plasschaert’s home-cooked processed meat products are now available at the deli at the Grand Hyatt Seoul in central Seoul until Nov. 22.