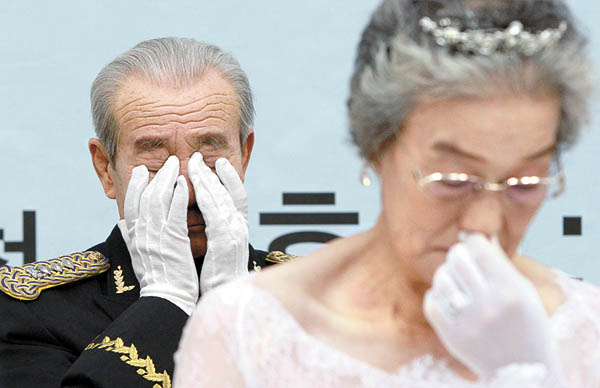 Kim Kyung-seob, 92, and his wife Um Gi-sim, 82, weep while listening to a thank-you letter their daughter, Kim Choon-sim, 58, read during a ceremony for Korean War veterans held Tuesday at the War Memorial of Korea in Yongsan District, central Seoul. [CHO MOON-GYU]

The Seoul Regional Office of Patriots and Veterans Affairs commemorated the 65th anniversary of the 1950-53 Korean War earlier this week by hosting vow renewals and wedding ceremonies for 12 veterans and their wives at the Museum Wedding Hall of the War Memorial of Korea in Yongsan District, central Seoul.

During the ceremony, Kim Chang-do, 92, read a letter out loud to his wife Woo Suk-ja, 80, in front of others gathered before them.

“To my beloved wife,” he said, “I feel bashful writing a letter to you, even though you have stayed by my side all these years. But as you stand before me, so beautiful and dressed up, it reminds me of the day we were married 61 years ago, amid such devastation. The passing years have been like a blur.”

Kim joined the Army after the South retreated from Chinese attack during the war.

“I may have survived that fierce battle in order to meet you,” he continued.

“Your girlish image from the time I first met you is still vivid in my mind, even though now we have already reached close to the end of our lives. … I promised myself at first to always make you happy, but it has been much tougher than I expected. I’m sorry I gave you such a hard time.”

As Kim continued to read through his letter, a few people in the audience began to weep.

For some of the couples, the event was the first chance they had to have a real wedding, while for others, it marked decades of being together.

“I’m lucky that I survived the war and was able to see our 60th wedding anniversary,” Kim said.

“Times certainly have gotten better,” added Kim Kyung-seob, 92, who joined the Army in 1952 during the conflict and served at the headquarters of the U.S. Far East Command. “Events like this were unimaginable in the past.”

A cosmetology professor and students at Seokyeong University sponsored the bridal makeup, while the Korean Broadcasting System choir performed during the nuptials.

“We tried to host the ceremony to show our gratitude and support for these couples,” an official from the Seoul Regional Office said.