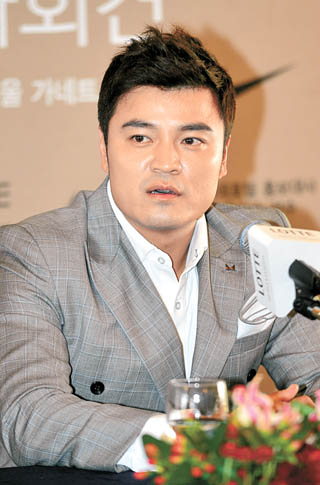 Texas Rangers’ Choo Shin-soo speak during his press conference at the Lotte Hotel in Seoul on Sunday. [NEWSIS]

Texas Rangers outfielder Choo Shin-soo returned to Korea on Sunday with a smile. The 33-year-old didn’t manage to get home last year as he was focused on the rehabilitation of his left ankle after surgery.

This year in the Major League Baseball (MLB), Choo had a .276 batting average, 22 home runs, 82 RBIs in 149 games. Though he struggled in the first half, the Busan-native proved his ability at the end of the season.

On July 22, Choo hit for a cycle against the Colorado Rockies and became the first Asian player to do so in the MLB. The former Seattle Mariners and Cincinnati Reds player also won the American League Player of the Month award for September.

He also saw his team finish first in the AL West, though the Rangers later lost to the Toronto Blue Jays in the AL Division Series.

Choo, along with Los Angeles Dodgers’ pitcher Ryu Hyun-jin, who came back to Korea on Saturday, is not playing with the national team that advanced to the quarterfinals of the Premier 12 tournament. But the left-handed batter, who made his big league debut in 2005, has something to say about the team and the players who are looking to join the MLB.

Q. What do you think about your performance this season?

A. I have looked back on whether I really had a successful season. I had a really bad start. I’m satisfied that our team entered the post season. Every year, I learn something, but this year served as an opportunity to grow up mentally.

What was the most memorable moment for you?

It must be when I got a hit-for-cycle. When I was playing for Cleveland Indians and marked 20-20 [20 home runs and 20 stolen bases], I was proud of the modifier “first Asian player.” A hit-for-cycle falls into the same category. It served as a good turnaround moment because I wasn’t performing well before. It just took me seven seconds to get to third base when I hit a triple in my final appearance at bat [to complete the hit-for-cycle]. During that time, bad memories of the first half spread in my head like a panorama. It was a meaningful moment for me.

What kind of record do you want to challenge in the future?

What was the most memorable thing you heard from your wife this season?

My wife is always consistent and that’s her best thing. She knows more than anyone else because she has lived with me since I was in the minors. This season, she made me not forget my past. I just thank her since she is always with me. This year, I learned from my wife that when you are not doing well, you should start from the small things.

What do you think about Korean players who are looking to play in the MLB next season?

I think Lee Dae-ho will do well when he comes to the MLB. Personally, I think he should have come two or three years ago. I have talked to Park Byung-ho several times before and I felt he had a strong will to play in the big leagues. I thought ‘this guy will be playing here.’ When I see Park hitting home runs in Korea, it’s just amazing. Like Kang Jung-ho played well, I expect Park to do well here.

The Premier 12 is still under way, but you are not in the tournament. How do you feel?

It’s sad for me. With the national team, I feel many things outside of baseball. It was also an opportunity for me to give back what I’ve received to fans. In fact, as an athlete, there are not many opportunities to play for your country. But as you know, the MLB office doesn’t allow players in each club’s 40-man roster to play in this tournament. Our players have always been playing well. I’m sure they will play fine in remaining games.

What do you think about local players who are still in the minor league?

I know what they are going through because I also spent difficult times in my career. When you are sick or having a surgery, you get more nervous. But you should never give up. When they can overcome that moment, they can turn the tide and will get an opportunity.

What’s do you think about the performance of the Rangers’ next season?

Honestly, this season, I didn’t know my team would make it to the post season because there were so many injured players. That’s why the result this season means a lot. Next season, we have Yu Darvish and Cole Hamels coming back from injury. We will also have a reinforced bullpen by signing good players. If we don’t have injured players, we will have a good result.