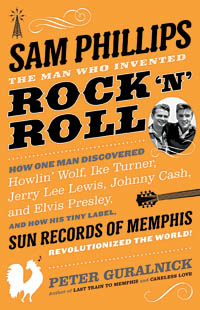 It was getting late at Sam Phillip’s tiny studio in Memphis, Tennessee, maybe time for a break. The local kid Phillips had called into the studio, Elvis Presley, had a good voice, but had yet to show that unique quality that Phillips was searching so hard to find.

Then Presley suddenly threw himself into an impassioned version of the old blues tune “That’s All Right, Mama,” taking the guitarist and bassist with him. Phillips asked them what they were doing. They said they didn’t know. Well back up, Phillips said, and do it again.

If Phillips had only caught lightning one time, he would have earned his place in rock history as the founder of Sun Records and the discoverer of Elvis. But then came Johnny Cash, Carl Perkins and Jerry Lee Lewis. Oh, and Phillips also recorded Howlin’ Wolf and Ike Turner’s “Rocket 88,” often called the first rock ‘n’ roll record.

Phillips’ single-minded vision was to record the “unique quality” of worthy musicians, and Phillips found a bunch of them in his mid-20th-century heyday. It helped that Phillips was a radio veteran with precise thoughts on how to make records and the expertise to do it. That “slapback” echo sound Phillips developed for his Sun recordings pretty much defines what early rock sounds like.

Guralnick, a veteran music journalist who wrote an acclaimed two-volume biography of Elvis, knows the incredibly rich Memphis music landscape well. In fact, he knew Phillips well in the decades before the music pioneer’s death in 2003. Guralnick paints a detailed and sympathetic picture of Phillips as a relentless visionary, a talker, a loving but imperfect family man and a perfectionist who relished imperfections that could make recordings special.

One example: Perkins actually slipped up when he shouted “go, cat, go!” during his recording of “Blue Suede Shoes.” Perkins wanted another take to correct it to “go, man, go” and to fix a mistake he made on guitar. Phillips told him no: that was the take with “the excitement.”

Like an incandescent nova, Sun burned out. Phillips’ tiny label had a hard time holding on to the big stars he launched.

The end of the book bogs down by devoting too many pages to these later years. It’s no match for Sun’s glory years when, as Jerry Wexler said, Phillips recorded a “millennium’s worth of music” in a decade.