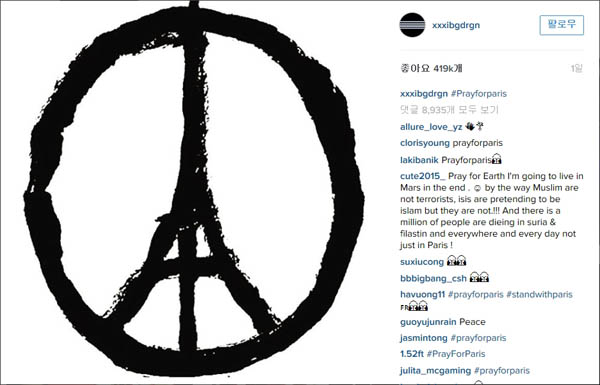 Korean celebrities paid condolences to the victims of the Paris terror attack on Saturday through their social-network accounts.

Yang Hyun-suk, the head of YG Entertainment, which is home to K-pop acts like Big Bang, Psy and 2NE1, uploaded an image of the national flag of France onto his Instagram account. Underneath the image of the flag, a message says, “Pray for France.”

K-pop boy group Block B grieved over the victims as well, saying, “We recently met President (Francois) Hollande and promised that we would hold a concert in Paris but the news of (the attack) makes us feel so sad. We once held a concert in Le Bataclan and we heard the place is one of the areas in which the terror attack took place. We want all of you to pray for France so that the country could regain peace.”

Block B performed in Le Bataclan in February and the boy group met President Hollande earlier this month in Seoul during an event which marked the 130th anniversary of diplomatic ties between Korea and France.