Networks brace for the ‘Post-TV Era’

Networks brace for the ‘Post-TV Era’ 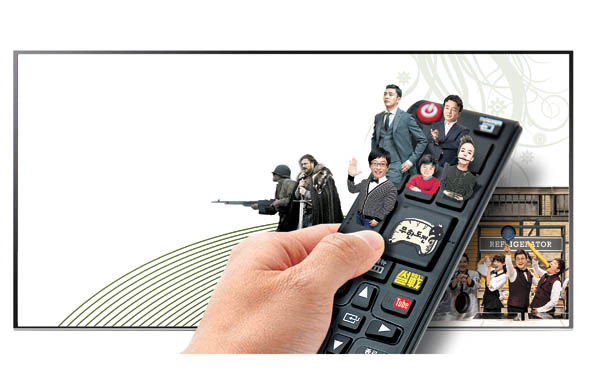 College student Kim Jeong-won hasn’t been watching TV lately. Even though Kim has a TV at home, he usually watches shows on his smartphone in his spare time, such as on the way to school.

Even though Kim doesn’t watch TV, he is mostly familiar with the popular shows on TV because he chooses what to watch based on word of mouth. He usually goes for shows that have been talked about a lot online or on social media networks. Although he sometimes does binge-watch already-released shows, he doesn’t mind just watching short clips of full-length entertainment shows online.

He also says he doesn’t care where his favorite content comes from, whether they are from terrestrial or cable channels, or from online sources such as YouTube or AfreecaTV. The name of the program, celebrities and quality of the content matters most to him, rather than who produces what.

“I have TV stations I prefer or trust, but I don’t really care much about what channel I’m watching when I watch a show,” he said.

“Sometimes I don’t know what channel I’m watching, but I just watch what’s on it.”

Many younger people are breaking down divides between types of content, as no matter where it comes from, they will most likely consume it on their smartphones.

According to the KT Economic and Business Research Institute’s research in 2013, 61.8 percent of youngsters aged 10 to 19 chose mobile as their top choice for watching videos.

So the generation has been dubbed “Post-TV,” which indicates that TV content has broken free from the TV platform to be widely consumed in other ways. The audience has grown used to watching shows on demand, taking in whatever content they choose based on their own schedule. 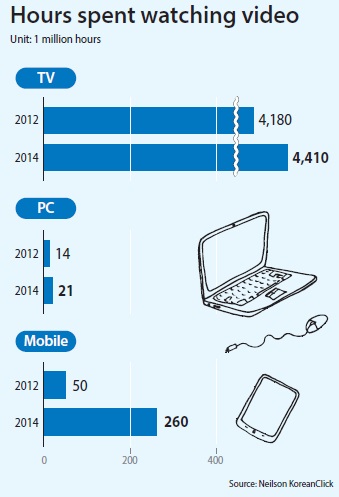 TV no longer on top

On top of such challenges to the traditional media outlets, video streaming services such as Netflix are adding additional pressure. The American company signaled its plans to expand to Korea next year.

“The concept of traditional scheduling of programs has disappeared, and now the main responsibility for the scheduling authorities is to maximize the profits of the original content by presenting it through diverse platforms,” a producer at a major terrestrial channel said.

“There are also worries that TV stations or channels lose power even when their content can survive.”

LG U+ perceived the changing tide and decided to provide new IPTV concept channels beginning early this month. Instead of showing names of existing channels that air many different programs, it decided to create “curated” TV channels, such as the “Infinite Challenge” channel, which only shows previous episodes of the entertainment program. There are also channels named after popular actors and actresses, such as the “Yoo Ah-in” channel, which airs shows and films featuring the popular actor.

The company will also categorize video-on-demand content based on genres and celebrities, so there can be channels specializing in entertainment shows, children’s programs, soap operas, shows popular overseas and videos trending on YouTube.

This could be a welcome change for those who have experienced flipping through channels looking for their favorite shows on TV.

If this new trend catches on, there will be more channels named after a particular show or genre, so that categories will be set not based on major TV channels but by popular content.

Another popular trend that has been emerging is that some consumers tend to not watch entire shows, preferring to pay attention to just parts of them. This has been pointed to as another example of the weakening power of TV stations.

Currently, some TV stations compile roughly five-minute clips of their longer programs. While the TV stations consider them promotional video to attract more viewers to the programs, some have been watching only the short clips.

“With content in clips, it is important to have catchy stories and have them narrated completely in a short amount of time, and the recognition of TV channels or stations is diluted,” according to a 2014 report called “Service Strategies for Video Clip Content” by the Korea Creative Content Agency.

The rise of web dramas

With so many new challenges arising, many broadcasters have become more active in producing content across multiple platforms, or content made to consume online rather than through the TV screen.

Many see the popularity of the web series “New Journey to the West,” featuring entertainers such as Kang Ho-dong, Lee Seung-ki and Eun Ji-won, as ushering in the “Post-TV Era,” as the show boasts over 50 million accumulated views.

The show’s creator, cable channel tvN, is attempting to use the momentum to expand the market for web-only entertainment through its mobile application tvNGO. Content provided through this platform are spin-offs of the channel’s existing shows.

Single-person online shows are also being consumed and produced more widely since terrestrial channel MBC brought it to the mainstream with its show “My Little Television,” which provides a candid look at a variety of celebrities and entertainers.

Through these online channels, celebrities are now trying to establish their own lines of contact with the larger audience. Earlier this month, singer Yoon Jong-shin started a one-person music show, whose title roughly translates to “Trust Your Bro,” through AfreecaTV. The show aims to be more like a professional music show, moving beyond just showing the everyday lives of well-known celebrities. Yoon has expressed his goal of providing a web-based entertainment show that will exceed the success of tvN’s “New Journey.”

Overall, terrestrial channels and big-name entertainment companies such as CJ E&M seem to be jumping on the web drama bandwagon. The recent trend shows that local companies are working with foreign entities to further expand the reach of content so that Korean-made content can more easily reach audiences worldwide. “Exo Next Door,” a web drama starring K-pop boy group Exo, collected 50 million views, as the series became available not only on Korean websites but also through online outlets in seven Asian countries.

“At this moment, many view web dramas as a part of ‘snack culture,’” said Min Seong-wook, a professor at Paekche Institute of the Arts, adding that he expects Korean companies to soon produce well-made web dramas like Netflix’s “House of Cards.”

“As production of web dramas continues, it might be possible to release the content online first, and then if certain content becomes more popular, those can be aired through terrestrial channels.”