In this era of rock-bottom interest rates and a sluggish domestic economy, neither borrowers nor investors can get the deal they want from traditional banks. Borrowers are looking for lower-interest loans, only to encounter strict screenings at large banks or prohibitively high interest rates from lending companies.

At the same time, investors want solid, steady returns amid the relatively low yields on bonds and equity holdings.

Lee Hyo-jin sensed these problems during the eight years she worked for Woori Bank, the country’s fifth largest by assets.

After quitting her job to find new opportunities, Lee heard about peer-to-peer (P2P) lending, where borrowers are directly paired with lenders through online and mobile platforms.

“As soon as I heard it from my friend, I realized it would work here in Korea,” Lee said. 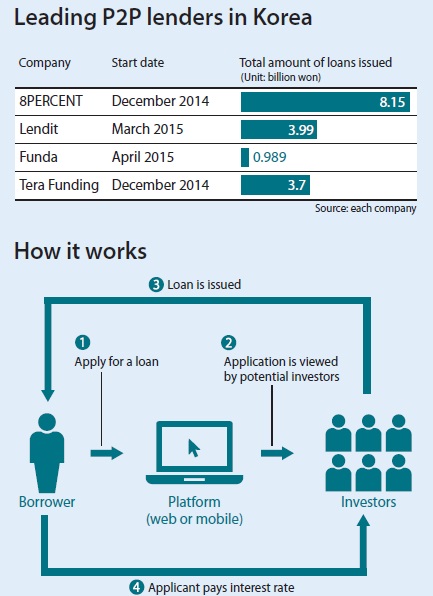 The 33-year-old now runs 8PERCENT, a P2P lending start-up, and is one of the many entrepreneurs betting big on the system.

More than 50 similar companies have sprung up, but the vast majority began their services only this year. Top financial talents, ranging from consultants and venture capitalists to bankers and fund managers, are flocking to the field.

Some of the most promising companies have even pulled investments from prominent venture capital firms such as Altos Ventures.

The emerging industry now faces both expectations and concerns.

That rate can translate into an attractive yield for investors, as P2P lenders currently charge little or no commission fees to draw in as many consumers as possible.

8PERCENT has issued 8.15 billion won ($7.02 million) in loans as of Nov. 9, the highest among competing platforms, and Lee aims to surpass 100 billion won next year. Lendit, a leading P2P lending player with investment from Altos Ventures, passed 3.99 billion won in lending, while Funda, which exclusively serves local small businesses, has given out 989 million won since launching in April.

The platforms distinguish themselves from banks in that they don’t wholly depend on the traditional mechanisms of credit analysis, which center on customer banking data. On top of the credit rating, the start-ups factor in alternative sources of information, including social media, about an individual’s behavior and characteristics.

Funda has developed its own method of credit analysis based on the sales trends of the businesses that want to borrow, as well as their credit ratings. The start-up set up a device that can be attached to cash registers to track sales trends and seasonal fluctuations in the long and short terms. 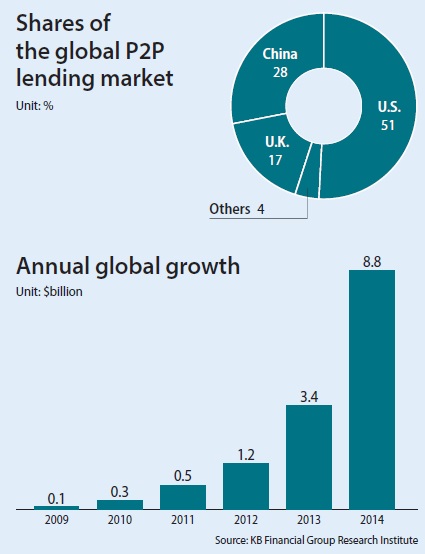 Damon Koo, the external affairs director of Funda, says the tool is reliable because it allows the company to predict disposable income or losses. 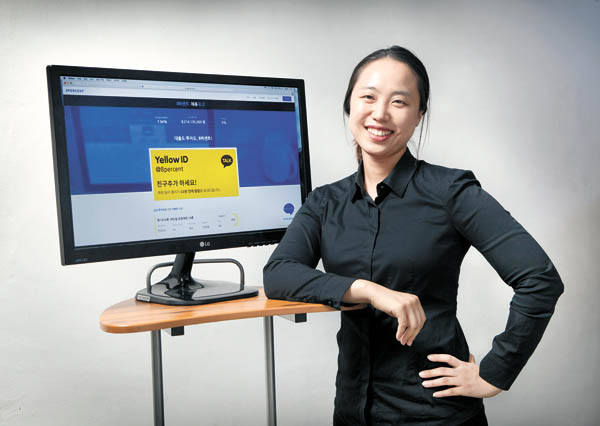 “For businesses like P2P lending, accurate credit analysis is essential,” Koo said. “The sales-based program allows us to properly assess the likelihood of getting paid back and has helped us achieve zero defaults or delays in being repaid.”

Funda’s major client base has credit ratings between five and seven, and most P2P lending start-ups don’t accept those with scores below an eight.

The emerging business presents the government with a dilemma.

President Park Geun-hye has promised to support IT-based companies working in the financial sector as part of her creative economy initiative, and P2P lending start-ups certainly fall within the category.

But lending is still risky, and the government currently has few regulations in place to protect those who invest in private lending.

Some, however, are saying that the answer is fewer regulations, not more.

Among those is Rep. Suh Sang-kee from the ruling Saenuri Party, who chairs the party’s special committee on financial technology, or fintech.

“Rep. Suh proposed a bill to ease regulations on P2P business at a recent assembly session, but opposition lawmakers expressed worries about it,” said one of his aides by phone. “Banks are also opposed to the idea, but he will continue to persuade both opposition lawmakers and bankers. The issue is not over yet.”

One of the reasons why Korean P2P lenders have so much confidence in the industry is because they have strong role models overseas.

In the United States, the P2P lending business has soared in popularity over the past few years. The U.S. market totaled just $89 million in 2008, but it grew to $5.5 billion as of the end of 2014, according to a report by Suh Byung-ho, a researcher at the Korea Institute of Finance.

As of the end of 2014, the U.S. market is dominated by two players: Lending Club, which accounts for nearly 80 percent of the market, and Prosper, which controls about 18 percent.

After drawing $125 million in investment from Google in 2013, Lending Club was listed on the Nasdaq in December 2014.

With the success, however, nearly 80 percent of the two lenders’ investors are now institutions.

“Banks in the United States used to be hostile to P2P lenders, considering them competitors,” said an owner of a small P2P lending start-up. “But now, the banks have changed their position and are investing because the industry is actually profitable for them.”

The industry in the United Kingdom has also expanded in recent years. The total size of P2P lending businesses swelled to 2.1 billion pounds ($3.2 billion) in 2014 from 110 million pounds in 2010, according to statistics by Suh.

Despite the success in other countries, Korean authorities are worried about the businesses’ long-term profitability, considering that it’s much easier for Koreans to get a loan at banks than in other countries.

“U.S. banks have stricter rules for issuing loans for individuals, which made it possible for P2P lending firms to prosper as an alternative,” a Financial Supervisory Service official told the Korea JoongAng Daily. “But Korean banks already have a very low threshold and relaxed requirements to get a loan compared to those in the United States, so people don’t need to get a loan from the P2P lending firms and pay higher rates.”

Backed by a growth in lending and the number of users, a few P2P start-ups have managed to grab investment from big-name venture capital firms. Altos Ventures, a Silicon Valley-based firm, invested 1.5 billion won this year in Lendit.

Han Kim, a managing director and co-founder at Altos, said that he spotted unique potential in Korea when it came to P2P lending.

“As I meet different P2P lenders, the demand and needs for P2P lending appeared obvious,” he said in a statement released by Lendit.

If not investments, P2P platforms are on the lookout to partner with operators abroad to expand their businesses.

Funda signed a memorandum of understanding with Aktis Capital Group, a Hong Kong-based private equity firm, to cooperate on the development of a fintech platform in China.

8PERCENT is also in talks to develop partnerships with other overseas operators, though the CEO declined to name the company.

The biggest challenge for future growth cited by P2P lenders is the high taxes on their profits. Since the companies are regarded as “lending businesses,” the government imposes a 27.5 percent tax on total operating profits, which they say is a huge burden.

“If we are categorized as an IT business, our profits would be taxed just 15 percent,” said an owner of a P2P lending company.

As the total value of P2P lenders in the country is so small - about 20 billion won - financial authorities have yet to set up a particular system of regulations in the industry, which ironically hinders development of the sector, insiders say.

“While banks have their own integrated system to share information on the credit of all debtors, we can’t share that kind of information among P2P lenders, so our credit information could be inaccurate,” Koo said. “Just like the U.K., it would be helpful for the development of the P2P lending industry if the government arranges specific regulations for the industry.