Duty-free licenses given to Shinsegae and Doosan

Duty-free licenses given to Shinsegae and Doosan

Some of the nation’s biggest conglomerates have been battling for a license to operate lucrative duty-free stores in Seoul since September, and the results are finally in.

The decision deals a huge blow to the defeated units, which have each shelled out hundreds of billions of won to revamp their duty-free stores, and instantly changes the landscape of the industry largely dominated by Lotte and The Shilla Duty Free.

Hotel Lotte, the operator of Lotte Duty Free, managed to retain its license to operate its store in Sogong-dong - which accounts for 45 percent of the sales in Seoul’s duty-free market - but will no longer operate an outlet at Lotte World Tower in Jamsil, southern Seoul.

The group has invested over 300 billion won ($256 million) in the outlet, which will have to shut its doors early next year.

Doosan Group, the machinery and construction conglomerate, will open its first duty-free shop at its signature Doosan Tower in the fashion-centric Dongdaemun area.

The location was central to Doosan’s strategy to win a license, with the group promising to transform the neighborhood to draw more tourists.

SK Networks, on the other hand, is being pushed out of the duty-free industry altogether.

The outlet has been open for more than 20 years, and SK Networks has recently invested 100 billion won in the location.

Expiration dates vary shop by shop, but all three licenses in Seoul and one in Busan that were up for grabs in the latest bidding were set to expire by the year’s end.

Shinsegae maintained the right to run its duty-free shop in Busan.

The Korea Customs Service mandated in 2013 that each operator’s license be subject to a public bid every five years. Prior to that, the licenses were automatically renewed every ten years.

The agency looks at different criteria like management ability and financial stability. But it also takes into account contributions to the local economy, cooperation with local merchants and the efforts to sell products made by small- and medium-sized companies. 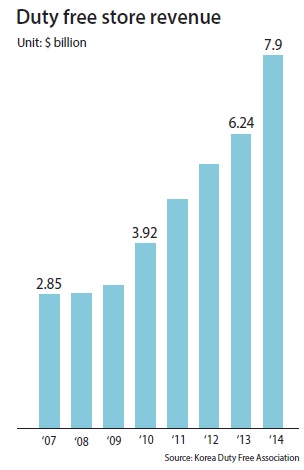 Presently, top players Lotte Duty Free Shop and The Shilla Duty Free accounted for 80 percent of all sales in the duty-free industry during the first half of this year, triggering concerns of excessive market dominance.

Sales by Lotte Duty Free, the top operator, accounted for 50 percent at 2.29 trillion won while Shilla had 30 percent with 1.35 trillion won, according to a Korea Customs Service report released upon the request of Rep. Shim Jae-chul of the ruling Saenuri Party.

The open competition is expected to reduce the dominance, but some have raised worries about the personal costs associated with the changes.

The same is true for Lotte, which employs 1,300 people at its soon-to-be-closed outlet.

Lotte Group said it will do its best to keep those workers on as employees.

“We will try our best to minimize the effects caused by the outcome across Lotte affiliates and partner companies,” the group said in a statement on Sunday.

“We will improve our shortcomings found during this process and keep striving to become the world’s top duty-free operator,” the company said.

Meanwhile, Doosan Group said that it will try to absorb workers from Lotte and Walkerhill Duty Free.