V10 keeps its focus on the big picture

V10 keeps its focus on the big picture

LG Electronics’ latest flagship V10 smartphone is drawing a lot of attention at home and abroad, although there is room for improvement in its design and processing software.

After two weeks of road-testing the V10 it became clear that it has lots of novel features to excite young, tech-savvy users who love taking pictures and listening to music on their mobile phones, but it is lacking in some important areas.

The V10 has dual camera lenses - a standard 80-degree lens and a 120-degree wide-angle lens - within its front-facing camera, the most touted feature. The idea is intended to eliminate the need for the silly-looking selfie sticks which are needed to take group pictures and panoramic shots.

Given the hype, the first thing I tested was the wide-angle lens option to see how many people fit into one shot with the camera held at arm’s length.

V10’s front-facing camera has two lenses. One with a wide-angle lens allows up to 120 degrees of angle, as shown in the left. Users may switch back and forth between a wide-angle option and ordinary angle option at 80 degrees, on the right. [LG ELECTRONICS]

As advertised, it was able to adequately capture eight people without people on the far right or left having parts of their bodies cropped out.

As well, the lens also enlarged the picture-taking area in the background to capture more people.

By comparison, in the same group picture using Apple’s iPhone6 and Pantech’s Vega Popup Note at the same distance, the faces and bodies of about three people were partially trimmed out of the frame.

To use the wide-angle lens, you are given two options on the screen, one with a single person and the other with several people. You simply tap the multiple-person screen to activate the wide angle function.

The coolness of the function depends on how much you like shooting large groups “selfie style” or want to take wide-angle panoramas.

Besides the special lens, LG has equipped the phone with manual controls normally reserved for more high-end cameras. It allows users to control shutter speed, white balance and ISO, though the mode is not easy to use.

V10’s audio function is also a plus with Sabre 9018C2M, a built-in digital analog converter and 9602C headphone amplifier.

After listening to different music, from pop to classic, it was clear that the V10 delivers rich sound. For the ordinary listener, the music sounded deep and multi-layered especially with dance music and instruments like drum and brass. 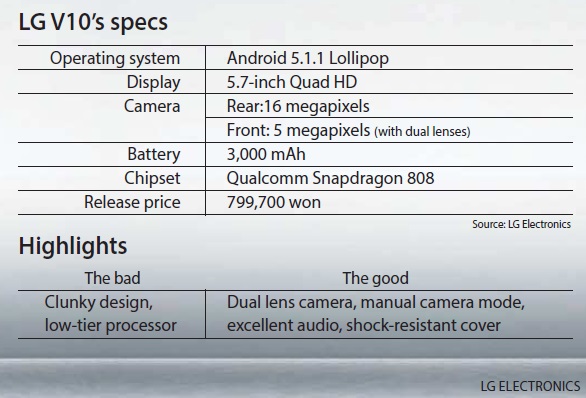 To further drive its audio function, the headset that comes with the V10 is not a cheap bundled item. It is tuned by AKG Acoustics, an Austrian company known for high-quality audio equipment.

The model’s design, however, was less impressive. Since I personally prefer sleek design over a sturdy look, the V10’s rugged exterior was not as attractive to me at first. But the fact that the cover is made of shock-resistant Dura Guard freed me from worrying too much about damaging the expensive phone. Also, it weighs a hefty 192 grams (6.7 ounces), compared to other top-tier peers which weigh mostly in the mid- 100 gram range.

The main area of weakness for the V10 is its chipset that powers the device. The model has adopted Qualcomm’s Snapdragon 808.

Smartphone manufacturers typically choose the latest, top of the range processor for their flagship premium product. However, since the newer Snapdragon 810 is embroiled in overheating issues, LG had little choice but to use the 808.

The chipset was more than good enough for most light tasks, but for those who need heavy, multi-tasking power, V10 may lose out to Samsung’s Galaxy S6 and the iPhone 6 by Apple whose processors received higher overall scores in benchmark tests.