At the intersection of history and art

At the intersection of history and art

Not many people know that there are a whopping 12 different types of roof tiles used in building traditional Korean houses.

Similarly, few know that just by looking at a piece of roof tile one can tell which period it’s from.

You can also tell from which country - Korea, Japan or China - it’s from. After all, all three countries have used roof tiles on houses for a long time.

Some may be wondering, “What’s in a roof tile?”

But apparently, roof tiles are one of the few artifacts that have been continuously in use from ancient times to present day. On them people have depicted their wishes, personal beliefs and values.

And as a result, some have dedicated their lives to collecting and studying roof tiles. Case in point: Isao Iuchi (1911-92), a Japanese doctor.

His collection of thousands of Korean roof tiles is famous for covering all eras of Korean history. It’s particularly notable for including roof tiles from the Goguryeo Dynasty (37 B.C. to 668 A.D.) and the Nakrang settlement (108 B.C. to 313 A.D.) - from which roof tiles are extremely rare.

Iuchi is hardly the only Japanese collector of Korean antiques, but he stands out from the rest in that he donated part of his collection to Korea. In 1981, he published with his own money a seven-volume catalogue of 2,229 Korean roof tiles, arguably the best of his collection. Today, most of these are back in Korea.

To mark the 50th anniversary of the establishment of diplomatic ties between Seoul and Tokyo, the Overseas Korean Cultural Heritage Foundation announced Nov. 9 that it has published a book on the Iuchi Collection.

The book examines 150 roof tiles Iuchi donated to the National Museum and another 150 he sold to the YooGeum Museum. It also includes five dissertations that show the chronological flow of Korea’s roof tile culture as well as their academic value.

“You can say the book is an encyclopedia of Korean roof tiles,” Ahn Hwi-joon, the foundation’s chairman, told reporters.

“Roof tiles are placed on the roof, so they’re not really visible. But even so, Korean roof tiles are clearly unique and sophisticated compared to those of China, where roof tiles were first used. It goes to show how Korean artisans were so dedicated even to things that are hardly seen.”

Ahn said he believes roof tiles are the essence of Korean art and culture. “In order for something to be defined as Korean art, it has to have several elements,” he said. “First is creativity and artistic value. Second is Koreanness. Third is representing the era. Roof tiles have them all.”

To celebrate the new book, the foundation and the YooGeum Museum have also co-organized a special exhibition at the museum.

Titled “Korean Roof Tiles and Bricks in the Iuchi Collection,” the exhibition showcases 165 roof tiles and bricks selected from the collection that the museum purchased.

“Roof tiles from the Three Kingdoms period [57 B.C. to 668 A.D.] are a way to compare different cultures of the three kingdoms [Goguryeo, Silla and Baekje],” museum Director Yoo Chang-jong said. “And during the ensuing Unified Silla period [676-935], Korean roof tiles were at their peak, showing such artistic and magnificent patterns and illustrations.”

Yoo’s special love for ancient roof tiles began in the 1970s when he was appointed to the prosecutors’ office in Chungju, North Chungcheong. There, he came across a one-of-a-kind roof tile that bore the characteristics of all three domains of the Three Kingdoms era. 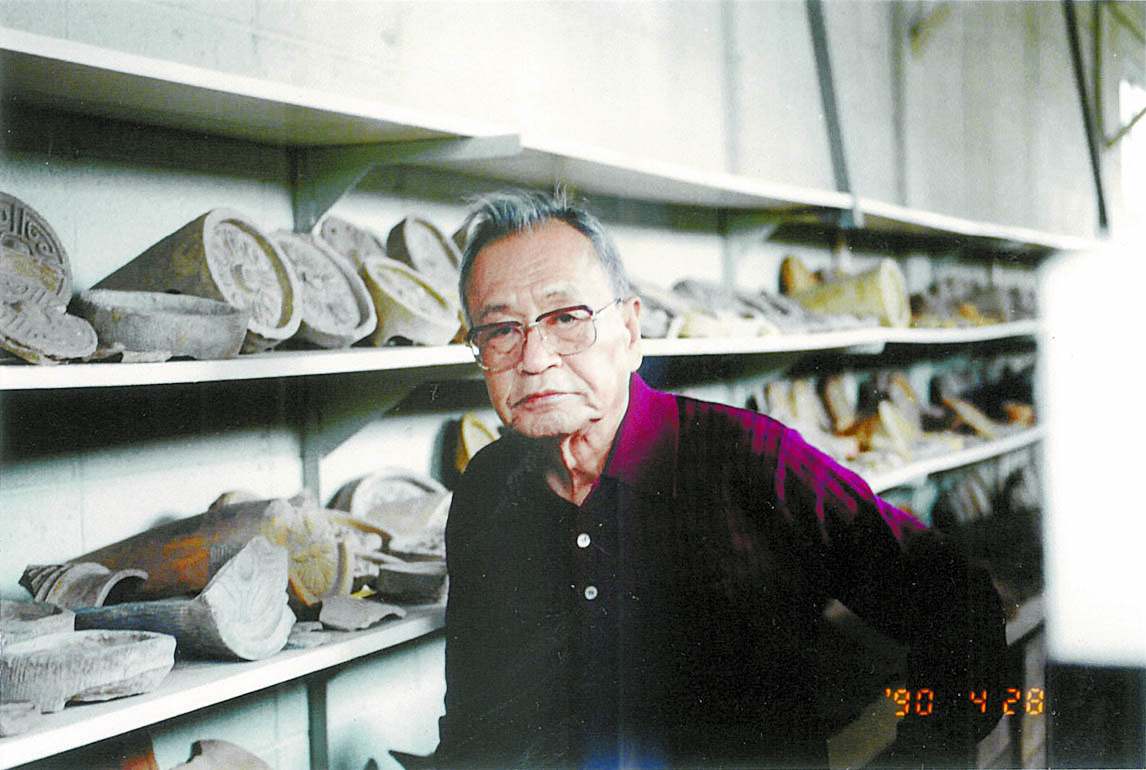 The former prosecutor said studying history is similar to conducting a prosecutorial investigation in that you track one clue after another. His knowledge of ancient Korean art, especially roof tiles, even earned him the nickname, “The roof tile prosecutor.”

“Roof tiles enriched my retired life,” he said. Today, besides running the museum with his wife, Geum Key-sook, a textile art professor at Hongik University, Yoo gives lectures at universities in China about Korean art.

The “Korean Roof Tiles and Bricks in the Iuchi Collection” exhibition runs until July 16. Admission is 5,000 won ($4.30). Museum hours are from 10 a.m. to 5 p.m. but on Tuesdays, Thursdays and Fridays only those who made reservations in advance may visit. The museum is closed on Sundays and Mondays. For more information, call 02-394-3451 or visit www.yoogeum.org.