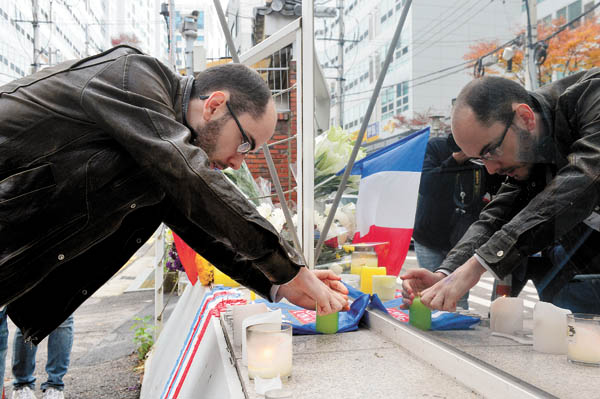 An Irish man lights a candle in front of the French Embassy in central Seoul on Sunday. [NEWSIS]

Following the deadly terrorist attacks in Paris that killed more than 120 people on Friday, the Korean government is bolstering counterterrorism efforts in Seoul.

Both Korea and France are members of the U.S.-led coalition to fight the Islamic State, which has claimed responsibility for the attacks, leading to concerns that Seoul could be a future target.

The meeting included officials from the Blue House, the Ministry of Public Safety and Security and the National Police Agency. 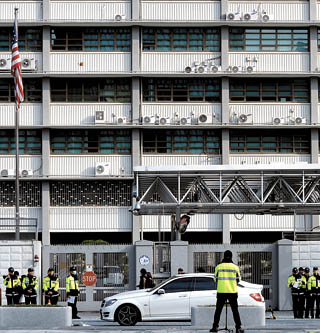 Seoul police stand guard outside the U.S. Embassy in downtown on Sunday. [NEWSIS]

“During the meeting, we concluded that we also cannot be off guard, and through analyzing the changing international terrorism environment, we need to bolster our security posture government-wide,” a foreign-affairs official told the JoongAng Ilbo on Sunday.

“In September, the Islamic State identified 62 countries as part of the U.S.-led coalition against terrorists, which included Korea,” he added. “They referred to the coalition as a ‘crusader alliance,’ and called for the murder of the people of those countries.”

Over the weekend, Korea joined the international community in its support for France and condemnation of the violence, considered the deadliest attack in the nation’s capital since World War II.

Six locations throughout Paris - including the Stade de France stadium, the Bataclan concert hall and several restaurants - were attacked by three coordinated teams of terrorists late Friday night. At least 129 people were killed and 352 wounded according to French officials.

Those who died in the iconic European city also included nationals of Chile, Belgium, Mexico and Spain.

The Korean Ministry of Foreign Affairs said that as of Sunday, the government had not confirmed any Korean casualties. There were over 1,000 calls to the Foreign Ministry’s call center this weekend, as opposed to the 600 normally registered.

The Korean government issued a travel advisory for Paris on Saturday, and has said it is working with the Korean Embassy in France to confirm the safety of its citizens.

The Foreign Ministry issued a “yellow” alert, or the second stage of its four-level travel warning system, urging travelers to refrain from travelling to Paris and the surrounding Ile-de-France region. It also issued a first level “blue” alert, advising caution to Koreans traveling to other parts of the country.

The ministry also called for Koreans residing in and visiting Paris to be especially cautious and advised those who planned to visit the country to review the necessity of their travel.

Officials of the Korean Embassy in France are visiting hospitals to check for victims in person, and the government is also operating an emergency hotline.

Around 14,000 South Koreans live in France, according to the Foreign Ministry, with nearly two-thirds of them located in Paris.

Likewise, the Ministry of Justice has set up a situation room for counterterrorism at its headquarters on Saturday, with immigration service officials working around the clock.

Customs employees at airports and ports nationwide have been instructed to boost security and crack down on people living in the country illegally.

Vice Foreign Minister Cho compared the violence to terrorist attacks in the United States on Sept. 11, 2001, and said the Blue House, police and other officials must coordinate to bolster security in Seoul.

The attacks will be a major issue at the two-day Group of 20 leaders’ summit in Turkey, which began Sunday.

President Park Geun-hye arrived in Antalya, Turkey, on Saturday to attend the G-20 summit and kick off a 10-day trip that will also take her to other global summits in the Philippines and Malaysia.

French President Francois Hollande was due to attend the G-20 summit, but canceled following the attacks that he called “an act of war.”

In response to the attacks, the ruling Saenuri Party emphasized the need to pass an anti-terrorism law in the National Assembly.

“Now has come a time when it is not just another country but our country that can be a target of a terrorist attack,” said Saenuri Rep. Kim Jung-hoon who chairs the National Assembly’s Policy Committee. “We need to talk [in an upcoming ruling party meeting on countering terrorism] on acquiring more security equipment and the budget to acquire them immediately, and need cooperation in the National Assembly to pass related legislation.”

The French Embassy to Seoul said it will be open through Monday afternoon for people to pay their condolences.

Hundreds of people gathered in front of the embassy in central Seoul on Saturday night in a moment of solidarity to commemorate the victims of the Paris attack.