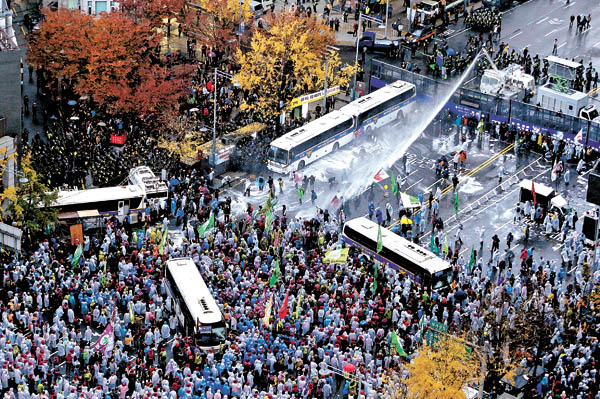 Riot police officers spray water cannons at protesters trying to march to the Blue House during a rally against government policies in Seoul on Saturday. Police used water mixed with capsaicin, the active ingredient in chili peppers, during the clash. [AP/NEWSIS]

Tens of thousands of protestors took to the streets over the weekend in downtown Seoul, calling for a barrage of national reforms in what turned out to be the largest antigovernment rally since 2008.

Local police estimate approximately 64,000 people took part in the Saturday protest, which was organized by the Korean Confederation of Trade Unions (KCTU) and primarily held near Seoul Station, Seoul Plaza and Daehakro from 2:30 p.m. through midnight.

Nationwide members of 53 left-wing labor groups and civic organizations arrived in the capital to demand the government reform the labor market in favor of blue-collar and temporary workers, retract the decision to reintroduce state-authored history textbooks, ban rice imports and crack down on Korean conglomerates, among other points.

A total of 51 protestors were booked for assaulting police officers and damaging police equipment, two of whom were high school students, according to authorities. At least 15 were injured and mobilized to a nearby hospital for medical treatment. The KCTU claims 29 protestors were wounded. 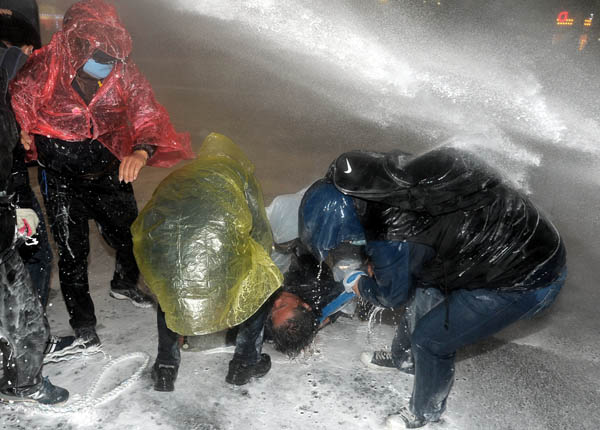 Baek Nam-gi collapses on the ground during a protest on Saturday as he was hit by water cannon of riot police. [NEWSIS]

Among some 22,000 police forces dispatched to the scene, 113 officers were injured, authorities said. Around 700 police buses and 20 trucks were used to barricade areas not on the rally’s authorized route.

One of the most violent moments of the day came when Baek Nam-gi, a 68-year-old farmer from Boseong County, South Jeolla, was hit by a water cannon in front of the Jongno district office around 7:30 p.m. He collapsed, losing consciousness before being taken to Seoul National University Hospital for a brain hemorrhage.

Video clips of the man stumbling in the middle of a road as other protestors try to drag him away from the water canon have spread on the Internet and social media platforms, turning him into a symbol of the protests.

Baek, who formerly headed the South Jeolla chapter of the Catholic Farmer Association, underwent surgery late Saturday night but has yet to regain consciousness.

Saturday’s rally flared up after 7:10 p.m., when the massive crowd marched toward Gwanghwamun Square, trying to penetrate the heavily fortified police line in order to reach the Blue House, their main goal.

The vehicle barricade was dismantled when protestors tied ropes to their tires and tugged in unison, displacing four police buses. Authorities said a man who appeared to be a college student broke a window of a police bus parked outside the Kyobo Building near Gwanghwamun Station with an iron hammer.

Riot police responded by using high-pressure hoses to spray the crowd with water mixed with capsaicin, the active ingredient in chili peppers.

Saenuri spokesman Lee Jang-woo lashed out at the labor unions in a statement Sunday, saying the rally was a “violent and illegal convention.”

Moon Jae-in, chairman of the main opposition New Politics Alliance for Democracy, said via his Twitter account the same day that “Korea’s democracy was blocked by unconstitutional police vehicle barricades,” and that authorities must explain why they had overreacted.

NPAD floor leader Lee Jong-kul called Kang Sin-myeong, commissioner general of the National Police Agency, on Saturday to condemn the police’s reaction to the demonstration after hearing about Baek, the farmer.

Lee said through a statement the following day that President Park Geun-hye “isn’t trying at all to hear what the public has to critique about government policies,” and that the administration was largely to blame for the peaceful protest turning violent.

In an urgent press conference at the Seoul Government Complex, Justice Minister Kim Hyun-woong denounced the gathering for being violent, saying “more than 100 police officers were injured while containing the protest and approximately 50 police vehicles were damaged.”

Kim further chastised labor groups for hindering authorities from arresting Han Sang-kyun, chairman of the KCTU, saying it was “intolerable” for them to interfere with the police.

The court has issued a detention warrant for the former leader of Ssangyong Motor Company Union earlier this month, holding him responsible for initiating massive, unauthorized rallies in April and May to commemorate the first anniversary of the ferry Sewol’s sinking in 2014.

The 53-year-old was indicted in June but hasn’t appeared at his court hearings.

Han was last seen Saturday in front of the Korea Press Center in Jung District near 1 p.m., when he read a statement during a press conference and was surrounded by KCTU members as police officers tried to apprehend him. Han eventually fled the scene.

The Blue House has yet to comment on the rally. President Park is currently in Turkey to attend the annual summit of the Group of 20, her first leg of a 10-day tour which stops include the Philippines and Malaysia.