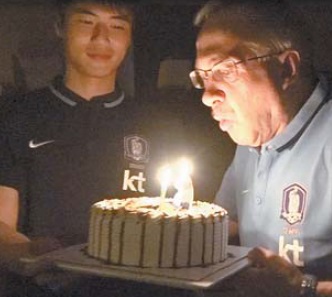 Korean national football team coach Uli Stielike has warned his team against complacency as they face Laos in this year’s final international match on Tuesday.

Korea is leader in Group G with five wins, while Laos is at the bottom with one draw and five losses. The Southeast Asian country is already eliminated from qualification.

In their previous meeting in September, Korea crushed Laos 8-0. However, Stielike warned that players should not be relaxed that they are playing against a weaker opponent.

“Laos has conceded lot of goals away, but at home it didn’t allow more than three goals,” Stielike said on Monday. “Players should get rid of thoughts that they are going to get an easy win.”

Stielike, who turned 61 on Sunday, said the team will play with a mindset that they are playing at home. The German, who took the helm last September, emphasized that the team will play more aggressively than they did in their previous match against Myanmar which Korea won 4-0 on Thursday.

“We will play with the mindset to collect a win,” he said. “After all, it’s a challenge against ourselves.”

Before the team departed for Laos on Sunday, Steilike said the team should win without conceding a goal to the opponents.

Korea this year had 15 wins, three draws and only one loss. Its only defeat was in January at the Asian Cup final against Australia. The win against Laos will give Korea a winning percentage of 80 percent this year, the highest since 1980. Having 16 wins is also the second-highest victory record in a single year.

In 19 matches this year, Korea managed to get 16 clean sheets. This is already a record in Korean football history for not conceding a goal in a year, surpassing the previous record of 13 matches in 1970, 1975 and 1978.

In 19 matches, Stielike’s side only gave up four goals, averaging 0.21 goals conceded per match. In 1991, the national team allowed an average of 0.17 goals per match, but that’s when Korea had only six international matches and gave up one goal.

Crystal Palace midfielder Lee Chung-yong is expected to play in the match against Laos. The 27-year-old didn’t feature in a match against Myanmar as he felt a pain in his ankle. However, Lee, who has played 69 matches for Korea, said he is in fully fit and ready to play.

In the previous encounter against Laos in September, Son had a hat trick and two assists. On Thursday, he came off the bench against Myanmar to set up two goals.

Meanwhile midfielder Koo Ja-cheol and goalkeeper Kim Seung-gyu will not be playing against Laos. Koo went back to Germany to join his club FC Augsburg since he can’t play due to yellow card accumulation, while Kim stayed in Korea to take his basic military training.