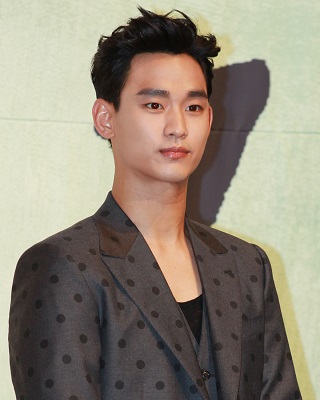 Actor Kim Soo-hyun has been chosen as one of the five most influential people in the Chinese entertainment industry.

The survey was conducted by Shanghai-based Dragon TV, and the broadcaster said on Monday that Kim is the only non-Chinese celebrity who made the list.

Kim’s huge popularity in the mainland has been proven multiple times.

Jiangsu Satellite TV sent a chartered airplane to Korea to invite Kim to the broadcaster’s show earlier this year, and the 27-year-old actor is reportedly paid 500 million won ($426,000) for a single TV appearance in the country.

China’s first lady, Peng Liyuan, also once said during a visit to Seoul last year that Xi Jinping resembles Do Min-jun, a fictional character played by Kim on the 2013-14 hit drama series “My Love from the Star.”

Kim is currently taking a break after the drama series “Producers,” but his new film, “Real,” is slated to open nationwide in December.

In the noir film, Kim plays the role of Jang Tae-young, an ambitious young man wants to build a casino of his own.

Meanwhile, the actor has recently been the subject of relationship rumors involving Ahn So-hee, a former member of the girl group Wonder Girls, but Keyeast Entertainment, the agency of both celebrities, has denied the rumors, saying they are just friends.