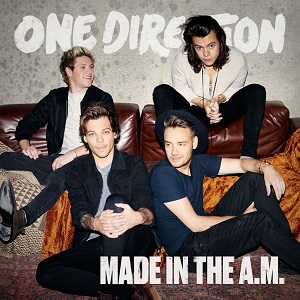 “It’s inevitable that everything that’s good comes to an end,” sings One Direction on “Love You Goodbye,” a wistful song from the British band’s fifth studio album, “Made in the A.M.”

The tune is about a romance’s demise, but the quartet - this is their first album since Zayn Malik’s departure - could just as well be addressing their upcoming hiatus. Since their first album, 2012’s “Up All Night,” One Direction’s skyward trajectory has seen the band seamlessly segue from chart-topping albums, reliably delivered every November, to sold-out stadium tours with little downtime in between.

One Direction has always been musical magpies - closely referencing The Who on “Best Song Ever” or Def Leppard on “Midnight Memories” - and that habit doesn’t stop here. With its echoes and big drum beat, album opener “Hey Angel” conjures up Robbie Williams; the breakdown of the hit single, “Drag Me Down,” mines “I Knew You Were Trouble” by Harry Styles’ ex, Taylor Swift; and don’t even get me started on the similarity between acoustic crooner “I Want to Write You a Song” and the Beatles’ “Blackbird.” AP