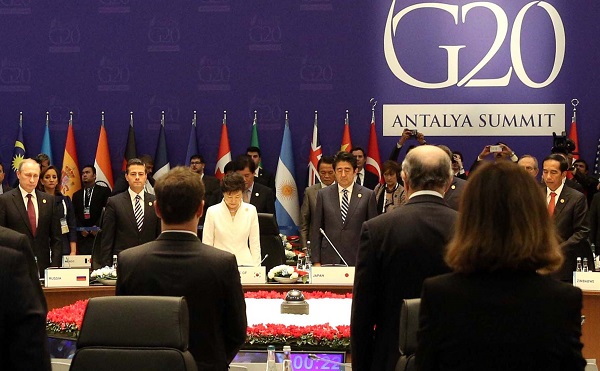 At the Group of 20 summit in Antalya, Turkey, on Sunday, world leaders pay silent tribute to the victims of terrorist attacks in Paris. [JOINT PRESS CORPS]

President Park Geun-hye vowed on Sunday to strengthen Korea’s cooperation with the international community to root out terrorism and offered more humanitarian aid for the refugee crisis in Europe.

In remarks at the working dinner of the Group of 20 summit in Antalya, Turkey, Park condemned last week’s terrorist attacks in Paris and a bombing in Ankara, Turkey, in October, and offered her condolences to the victims and the people of France and Turkey. “Terrorism has continuously evolved to a new appearance and transcended borders,” Park said. “It not only threatens the lives and basic values of the people but also becomes a cancer on our world, obstructing global peace and security.”

Because no one is living in a safe zone anymore, Park said, the United Nations Security Council’s resolution 2178 on foreign terrorist fighters, adopted in 2014, must be implemented to the fullest extent. She also encouraged various bilateral and regional efforts to prevent terrorism.

Earlier this year, Korea was appointed to chair the inter-governmental body that combats international money laundering and terrorist financing. The FATF, established in 1989, mostly consists of members of the Organization of Economic Cooperation and Development. The group has 36 member countries and 24 observers. North Korea and Iran are on its blacklist.

Park said efforts to stop the spread of violent extremist ideology is crucial to root out terrorism, urging the international community to work together on economic and social problems. She promised Korea’s strengthened cooperation with the UN, European Union, Middle East and Southeast Asia.

A political solution to resolve the instability in countries such as Syria and Libya is urgent, Park said, noting that the major refugee crisis from the Middle East and Africa has become a serious challenge to international humanitarianism.

“Korea established a law governing refugees in 2012 - for the first time in Asia - and provides necessary humanitarian aid to the refugees,” Park said. “From now on, we will expand humanitarian aid to Syria, Afghanistan, Iraq and refugee-hosting countries to resolve this issue.”

During the G-20 session earlier in the day, Park proposed massive infrastructure investment with the international community for North Korea and neighboring regions in return for Pyongyang’s abandoning of its nuclear arms program.

She urged the United States, China and Russia to cooperate to heighten the effectiveness of their Europe-Asia strategies. Korea has already proposed an initiative to expand transportation, logistics and energy networks in the region, Park said, and Seoul’s recent agreement with Beijing to jointly push forward China’s “One Belt, One Road” policy and Korea’s Eurasia Initiative can be a good example. The “One Belt, One Road” policy is a development strategy unveiled by Chinese President Xi Jinping in 2013.

“If North Korea gives up its nuclear program and joins the path of openness and cooperation, we will work with the international community to support infrastructure investments in the Northeast Asian region, where an annual $63 billion is expected to be spent,” Park said. To this end, a Northeast Asia Development Bank, proposed by Seoul, should be established to focus on development of the region, and it must cooperate with the Asia Development Bank (ADB) and Asia Infrastructure Investment Bank (AIIB), Park said.

Sources said Seoul’s proposed Northeast Asia Development Bank will play a different role from that of the ADB, which focuses on Southeast Asian development projects, and the AIIB, which aims at developing China’s western region. The government has been promoting the idea to the United States, China, Japan, Russia and Mongolia.

Meanwhile, a conciliatory mood was felt between Park and Japanese Prime Minister Shinzo Abe during the G-20 summit. Japan’s national broadcaster NHK reported that Park and Abe sat next to each other during a luncheon and Abe expressed his appreciation for the warm reception he received during his recent visit to Seoul.