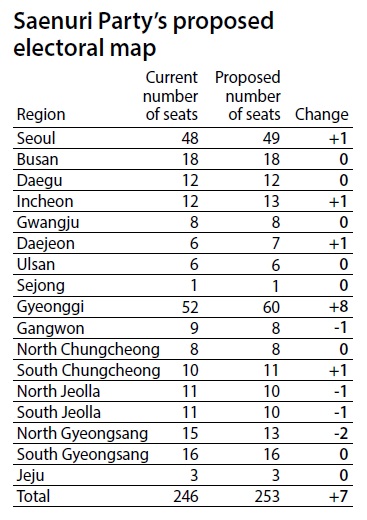 The ruling party drafted a proposal to cut equal number of electoral districts in the rival provinces of Gyeongsang and Jeolla to resolve deadlocked negotiation over a new constituency map, the JoongAng Ilbo learned Sunday.

The JoongAng Ilbo obtained an internal document from the ruling Saenuri Party on Sunday and confirmed the proposal with a senior party official.

One seat from North Jeolla and another from South Jeolla will be cut, the Saenuri proposal showed. While South Gyeongsang will maintain its current number of seats, North Gyeongsang will lose two seats, according to the proposal.

The Saenuri proposal showed that the number of proportional representatives will be reduced by seven, while the number of electoral districts will be increased from 246 to 253.

The legislature was tasked to create a new electoral constituency map following a Constitutional Court ruling in 2014 that the current map is unconstitutional. The court ordered redistricting to fix unequal representation caused by population changes, specifically migration of people from rural areas to cities.

According to the ruling, the ratio of the most populous electoral district to the least populous must be lower than two to one. Currently, that ratio is three to one.

The Saenuri Party and the NPAD failed to complete a new map to be used for the April general election before a self-imposed Friday deadline.

According to the Saenuri’s proposal, five seats in rural farming and fisheries regions will be reduced. Under this plan, Gangwon, North Jeolla and South Jeolla will each lose one seat and North Gyeongsang two seats.

Until now, the Saenuri has insisted that their strongholds of Gyeongsang should lose fewer seats than Jeolla. It cited the National Election Commission’s decision in late August that an electoral district must have a population of at least 138,000. In South and North Gyeongsang, there were six districts that failed to meet the ceiling limit, while eight districts in North and South Jeolla were short of the standard.

The Saenuri’s proposal to cut two seats each in Gyeongsang and Jeolla, therefore, is a concession.

It also planned another concession, proposing that Gwangju will keep eight seats, even though its population is shrinking.

According to the Saenuri plan, eight seats will be increased in Gyeonggi to reflect the population growth. Seoul, Incheon, Daejeon and South Chungcheong will each gain one seat.

In total, the number of electoral districts will increase by seven.

The Saenuri’s proposal to increase just one seat in Seoul means a major overhaul for Jung District. As of now, Seoul’s Gangseo and Gangnam districts each have nearly 600,000 residents, and they need additional districts. While adding two, the Saenuri Party plans to take away one seat allocated to Jung District, which has only 127,000 residents.

Rep. Won Yoo-chul, floor leader of the Saenuri Party, said in a radio interview that the party has created a plan to reduce the number of proportional representatives by seven, or nine at the most. Rep. Lee Jong-kul, the NPAD floor leader rejected the plan.

The National Assembly’s special committee on political reform will expire on Dec. 15, and assembly voting sessions are scheduled for Dec. 1 and 2. Voting could occur then.