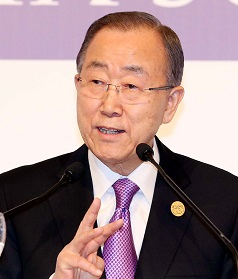 UN Secretary General Ban Ki-moon is reportedly planning to visit Pyongyang soon, according to local media, a trip that could help realize his long-held desire to help promote inter-Korean dialogue.

The source added that the UN chief’s visit most likely will include a meeting with North Korean leader Kim Jong-un, and could be an opportunity to try to resolve the North Korean nuclear issue and other Korean Peninsula matters.

However, the South Korean Foreign Affairs and Unification ministries, the Blue House and United Nations headquarters did not confirm if Ban, who was in Turkey for the Group of 20 summit Monday, will make a Pyongyang trip.

Jeong Joon-hee, the Unification Ministry spokesman, said in a briefing on Monday, “We have nothing to say as the government on this.” He added that the ministry would have not received any sort of notifications yet from Ban’s office, and that under inter-Korean exchange and cooperation act, a South Korean citizen has to report to the ministry three days ahead of a visit to Pyongyang or ten days after a return.

The UN secretary general’s spokesman Stephane Dujarric said in a statement on Monday, “The secretary general has always said that he is ready to play any role in order to help enhance dialogue, stability and peace on the Korean Peninsula. As for any future plans by the secretary general to travel to the Democratic People’s Republic of Korea, we have no further comment at this time.”

Should Ban carry through with a visit, he would become the third UN secretary general to visit North Korea.

In May, Pyongyang canceled an invitation for Ban to visit the Kaesong Industrial Complex without explaining why a day before he was set to arrive.

He would have been the first UN chief to have visited Kaesong, a symbol of joint economic cooperation between Seoul and Pyongyang, and Ban called the last-minute cancellation “regrettable.” Government officials pointed out that following Pyongyang’s abrupt cancellation of the May trip to Kaesong, Ban may exercise more caution about announcing a trip to North Korea too far in advance.

Ban has repeatedly expressed his desire to visit North Korea in his capacity as UN chief since he took up the post in 2007.

He has one year left in his second term.

Ban visited Kaesong in 2006 when he was South Korea’s foreign affairs minister.

Rep. Park Jie-won, former floor leader of the opposition New Politics Alliance for Democracy, said in a radio interview with YTN on Monday, “In a situation where North-South relations are convoluted, it will be great if the UN chief visits Pyongyang and helps to untangle such relations, avoid war on the Korean Peninsula and resolve the North Korean nuclear issue.”