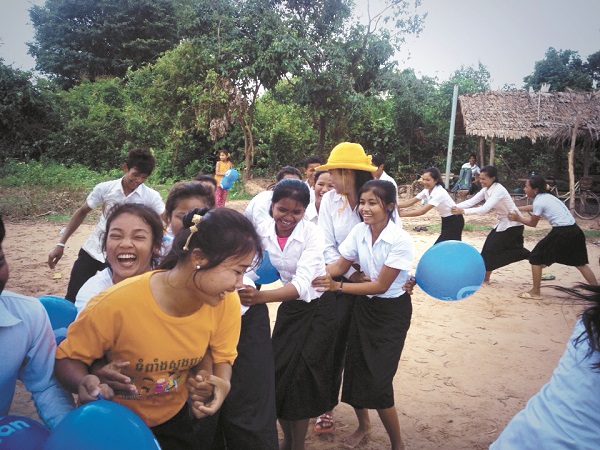 Sponsors of Cambodian children participate in a sports meeting held in Siem Reap, Cambodia as part of a project named “The Good Trip” organized by Plan Korea. Through the project, sponsors can visit relief projects to do volunteer work. [PLAN KOREA]

Plan Korea, the Korean branch of non-profit international relief organization Plan International, is organizing a year-end project called “The Couple,” which it will hold a week before Christmas.

Past experience shows that some of the matchmaking works.

Jeong Ha-kyung, 35, and Oh Sang-ha, 26, met at the first “The Couple” event. After graduating from a university in Australia, Oh came back to Korea in March 2012. He began donating 30,000 won ($26) every month to Tanzanian children through Plan Korea. Jeong was financially supporting a child in another developing country through the charity. 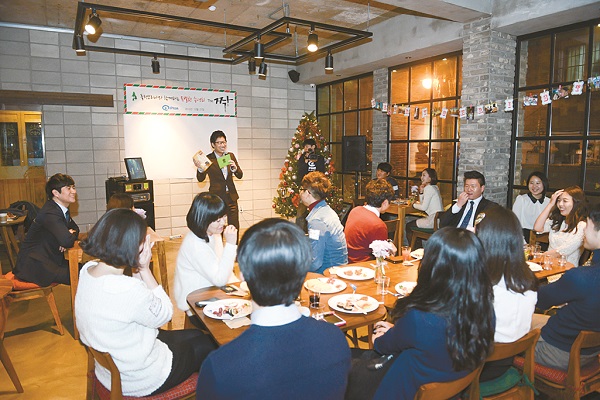 Donors to the non-profit organization Plan Korea who are in their 20s and 30s participate in a year-end event called “The Couple” organized by the organization. [PLAN KOREA]

“I decided to participate in the event because I was simply curious about other donors to the organization,” said Oh. “And there I met my companion for life. When we got married, I promised myself to keep supporting children and share with others.”

Kim Hae-hyun, a manager at Plan Korea came up with the matchmaking idea. “I wanted a heart-warming year-end event that people could enjoy. I’m preparing various programs for this year such as a self-introduction time, choosing a person by a favorable first impression, lunch box dating, and an auction of personally cherished goods.”

All proceeds including participation fees and the auction proceeds are used to help children in foreign countries like Laos.

“Funation” is a new buzzword in the charity industry world that combines the words fun and donation. It refers to events that reward donors for their generosity with some entertainment.

The ice bucket challenge was the most successful example of funation. Started in the summer of 2014 in the United States to increase the public’s interest in Lou Gehrig’s disease, amyotrophic lateral sclerosis (ALS), and increase fund raising, it encouraged people to pour a bucket of ice water over their heads after challenging friends to do the same. People who didn’t were supposed to make a contribution to the ALS Association. Films of people dousing themselves spread via social media.

Many Korean celebrities took part including Suzy from the girl group miss A, singer IU, and actor Hyun Bin.

Funation has actually been prevalent in Korea since the early 2000s. As young people became interested in charities, new ways of donating or doing volunteer arose.

Kim Su-hee from World Vision, a Christian humanitarian organization combatting poverty and injustice worldwide, said that with funation, “interesting and unique programs which encourage young people to participate are created.”

DIY (Do It Yourself) programs allow donors to make goods they wish to donate. The Miral Welfare Foundation has a project called “Lighting Children” in which participants make lanterns and send them to African countries that suffer from lack of electricity. Some 2,000 participants in the Hi Seoul Festival, held from Nov. 1 to 4, assembled to make the lanterns.

“People love the event since both parents and children can participate,” said a member of the foundation.

Save the Children has organized “Hat Knitting Campaign” for several years to help premature babies around the world.

Medical nonprofit organizations like Operation Smile collaborated with luxury brands like Fendi and made handbags designed and made by actresses Ha Ji-won and Ko So-young and figure skater Kim Yu-na. The bags were sold through an online auction held from Oct. 31 to Nov. 10.

“Culture Funation” is also popular. Good Neighbors, an international, non-profit humanitarian organization promoting children’s education, is currently organizing an event called “Happy Donation: Stand Us.” If the donations reach a targeted amount, donors selected in random drawings can win tickets to musicals such as “Man of La Mancha” or spend time with celebrities or local singers. Early next month, 10 people who donated money to build wells in Rwanda will win tickets to the musical “The March of the Youth.”

Compassion International, a child-advocacy group, started a campaign named “Blue Book” early this month. In blue diaries, people write their experiences of supporting children and how it felt and send them back to the organization for exhibition.

Plan Korea also organizes “The Good Trip,” in which donors visit places where relief activities are done at their own expense and meet the children they sponsor.

“Digital Funation,” in which people can enjoy using social networking services and mobile games, is another trend.

One example is a mobile bazaar application called Donordonut. On one side, a person uploads a picture and a proposed price for something he or she doesn’t use anymore; on the other side, someone decides to buy it. The seller chooses an organization to donate the money to. Anything can be traded, from a movie ticket to agricultural and marine products.

Through the app Bigwalk, created in 2012, a user can accumulate 1 won per every 10-meter walked on a charity walk. The money goes to buying prosthetic legs or a special wheelchairs for disabled children. In 2014, about 820 million won was raised through the app and 43 children were able to receive prosthetic legs.

Tree Planet is a popular mobile game. When people plant and grow virtual trees in the game, they can actually donate trees to developing countries.