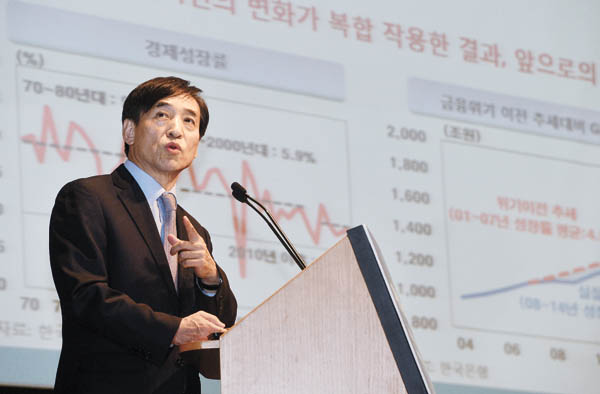 Bank of Korea Gov. Lee Ju-yeol delivers a lecture on the Korean economy at the Korea Chamber of Commerce & Industry’s headquarters in central Seoul on Tuesday. [NEWSIS]

Amid growing speculation that the U.S. central bank might postpone its first interest rate hike since 2006 in the wake of the terrorist attacks in Paris, Korea’s central bank chief on Tuesday maintained that there is still a high likelihood of an increase in December.

Bank of Korea Gov. Lee Ju-yeol said the U.S. Federal Reserve would probably follow through on its plan to raise the key rate next month despite greater volatility in financial markets around the world triggered by the Paris attacks, during a meeting with chief executive officers of major businesses hosted by the Korea Chamber of Commerce & Industry in central Seoul on Tuesday.

“In spite of the terrorist attacks in Paris, there is a very high possibility of a rate hike [by the Fed] in December,” Lee said at the event.

“As low interest rates have remained for a long period, there are excessive risk-taking behaviors in the rate market.”

In October, the U.S. Fed kept its rate at near zero, but suggested it could make a hike by the end of year.

With the news of the Paris tragedy over the weekend, Asian stock markets, including the Kospi in Seoul, fell immediately on Monday. But the Kospi managed to rebound the following day, closing above the 1,960 mark.

Meanwhile, President Park Geun-hye called for careful considerations on rate hikes at a Group of 20 summit on Monday.

“Normalization of monetary policies in advanced nations should be made in a careful and gradual manner, considering its impact on emerging economies,” Park said during the summit in Antalya, Turkey. She also emphasized the need for increasing safety nets such as currency swap deals.

Despite the expected overseas financial changes, Lee said the Korean economy would grow 3 percent next year.

“But it will be difficult to expect rapid growth as much as businesses want,” the governor said. “The direction for Korean economic policies should be heading to ramp up its potential growth abilities.”

As for the first-ever decline in sales of the country’s manufacturing industry, Lee cautioned manufacturers to be mindful of securing new growth engines. He also warned the industry against accumulating debt.

“Korean business leaders have contributed significantly to the country’s economic growth,” he said. “The Korean economy will sustain its growth through innovation.”