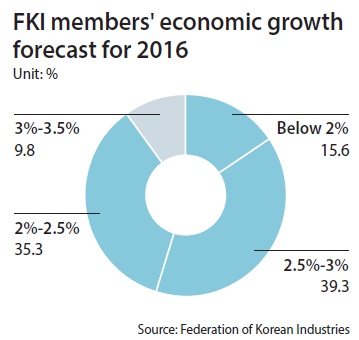 Over 90 percent of major companies expect the Korean economy to grow below 3 percent next year, lower than estimates from various government institutions, according to a poll by a business lobbying group representing conglomerates on Tuesday.

The Federation of Korean Industries (FKI) said its survey of 285 out of the top 600 companies by revenue showed that 39.3 percent predict economic growth next year will register 2.5 percent to 3 percent, and 35.3 percent predicted a range between 2 percent and 2.5 percent.

Respondents who said less than 2 percent accounted for 15.6 percent of the total, and only 9.8 percent had the optimistic outlook that the national economy would grow 3 percent to 3.5 percent.

“Companies are planning to solidify their internal management by taking measures such as restructuring,” said Hong Sung-il, head of the fiscal and finance policy team at the FKI. “Government-level support, such as enacting a special bill to facilitate corporate restructuring and completing labor reforms, is urgently needed to that end.”

The corporations’ view of growth this year was even worse. Ninety-eight percent of the respondents said the Korean economy would post less than 3 percent growth, and 49 percent of that group predicted the figure would be between 2.5 percent and 3 percent. Over half of the respondents noted that their own revenue this year fell short of targets set at the beginning of the year. Only 19 percent replied that revenues exceeded initial targets.

Almost half of those respondents cited the double whammy of sluggish local demand and falling exports as the biggest problems for the economy. Almost a fifth mentioned intensified competition in markets abroad, including China, whereas 10 percent came up with increased production costs due to a rise in raw material prices.