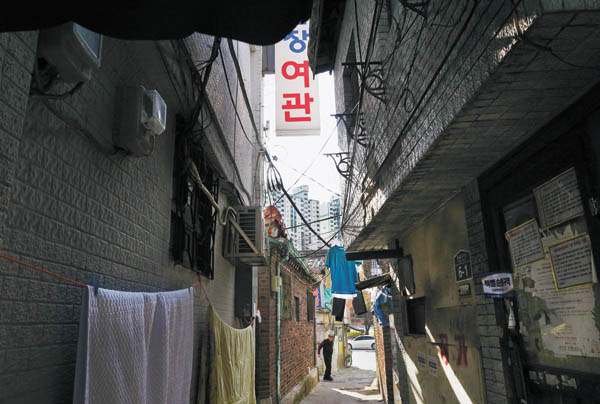 Okbaraji Golmok or Inn Alley in Muak-dong, central Seoul, will soon be bulldozed as part of a redevelopment plan. But people who are against the demolition say the area has historical value, because families of independence fighters during the Japanese colonial era (1910-45) used to stay at the inns and take care of their detained loved ones. [SUNG SO-YOUNG]

The city of Seoul is under construction constantly and the neighborhood of Muak-dong in Jongno District, central Seoul, will be soon bulldozed.
Some businesses are still in operation but others have closed down or plastered notes on their doors informing of their relocation away from the soon-to-be-demolished neighborhood, which is across from Seodaemun Prison History Hall.

Seodaemun Prison was the country’s first correctional institution with modern facilities constructed during the Japanese colonial era (1910-45). Historical figures like Kim Koo (1876-1949) and Ryu Gwan-soon (1902-1920), who participated in the independence movement, were detained and executed there.

Few traces of Korea’s turbulent modern history remain in the well-organized and tranquil Seodaemun Independence Park, where the history hall is located, but across the way an old, narrow alley dotted with shabby inns still reflects the tears and pain of an older era. 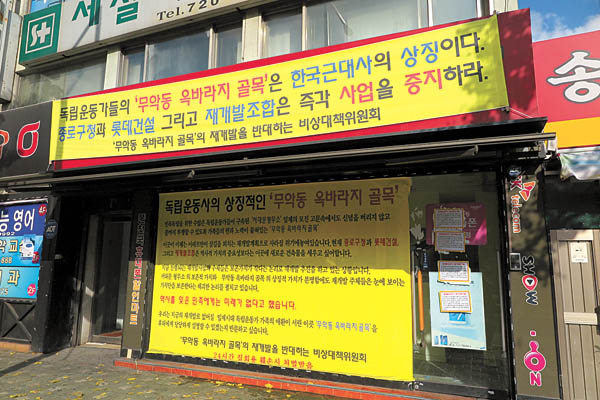 Signs hung up by residents and supporters detail the historical value of the alley. [SUNG SO-YOUNG]

Now only four or five inns remain in the gloomy alley that is lined with stained, old low-rise buildings, but the street once housed dozens of inns back in the 19th and 20th century. The inns housed the families of prisoners, who were frequently jailed for their involvement in the independence movement.

The families stayed across from the prison in order to look after their detained sons, fathers, brothers and husbands. Thus the street was called Okbaraji Alley. In Korean ok means prison and baragi refers to taking care of someone.

“Prisoners used to live in poor surroundings,” Kim Tae-dong, a senior curator at Seodaemun Prison History Hall, said. “It was hard to survive with things provided by the prison.”

And this historic alley in Muak-dong is set to be razed no later than March, according to the Jongno District Office’s redevelopment team. At the site where the remaining inns still stand, there are plans to build high-rise Lotte Castle apartment complex.

As is often the case with redevelopment plans, some residents are in favor of their neighborhood getting a face-lift, while others are opposed. Those who are against the redevelopment project along with civic groups tried to put a stop to the plan over the summer, citing the historical significance of Inn Alley.

A banner welcoming the start of the redevelopment project hangs proudly, while a few feet away another sign details the historical value of the neighborhood. 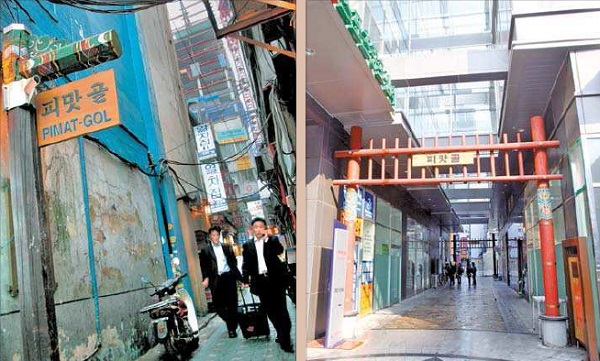 Preservation and redevelopment are ongoing issues in Seoul. Pimatgol, an old, narrow alley in central Seoul dating back to the Joseon Dynasty (1392-1910), was razed to make room for new construction, including a 24-story multipurpose building. [JOONGANG ILBO]

“I have been to Japan a couple of times and I was surprised to see that they preserve even small things,” said the owner of Gubonjang, one of the remaining inns. “Some Koreans disparage Japan, but they are not entitled to do that. How come they can demolish this area?”

The owner, a woman in her 60s, said she has been operating Gubonjang for 42 years.

“You don’t know how sturdy this building is because it is made with sand from the Han River,” she said while pointing to the walls of the inn.

“If they paid me hefty compensation, then I would consider selling this building, but they don’t,” she continued. “There is no reason for me to sell this. We filed a lawsuit to stop it.” 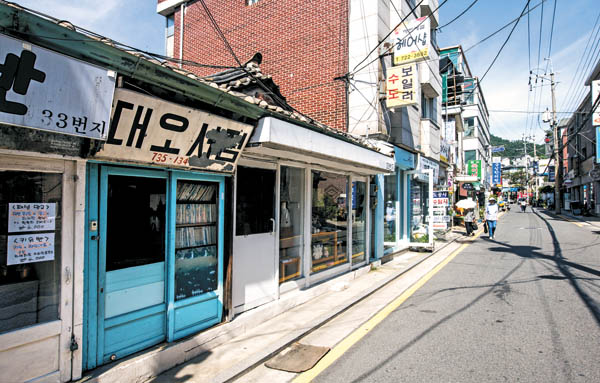 The Daeoh Bookstore, which opened in 1951, in Seochon, west of Seoul’s Gyeongbok Palace, was designated as a future cultural asset by the Seoul Metropolitan Government, but the owner asked the city to cancel the designation because it may affect the property rights. [JOONGANG ILBO]

Since the conflict over Inn Alley made headlines during the summer and attracted attention to the neighborhood’s storied past, those who are in favor of the redevelopment plan have been on the lookout for outsiders, especially those who take pictures of the area. When this reporter visited the alley recently, a well-built young man approached and asked why I was taking photos. When I told him I was a graduate student studying architecture, he said, “Don’t post the pictures.”

Park Kyung-mok, the director of Seodaemun Prison History Hall, told OhMyNews in February that there are no historical photos or documents about the alley.

“Residents don’t even like outsiders visiting this area because they are concerned about stumbling upon documents which prove [the historical value] of Inn Alley, and that may affect the redevelopment plan,” he said.

Senior curator Kim explained, “The story about Inn Alley has been handed down verbally by guards who used to work for the prison.”

When the redevelopment plan for the neighborhood was featured in newspapers and TV news shows in August, Jongno District Office said a lack of documentation was a major reason for permitting the project. In addition, all the inns were built in the 1950s and ’60s, with little architectural value.

Hwang Pyeong-wu, a former member of the Committee for Cultural Heritage and currently the director of the Eunpyeong History Hanok Museum, however, refuted the claims of redevelopment advocates.

“There can’t be photos and other documents,” he said. “How could they can take photos while they were taking care of prisoners? I know the area well because I sneaked into that place when I was involved in the student movement back in the ’80s. There were people who were doing okbaragi in the ’80s.”

“The prison is important because it was a place in which historical figures were confined, but the area is also meaningful because a lot of innocent, ordinary people were put behind bars during Japanese colonial rule,” he continued.

Similarly, Kim Hong-nam, the former director of the National Museum of Korea, said, “A lack of documents can’t be valid grounds for permitting the redevelopment project. Interviews with people who know the area could be enough documentation.”

Even without documentation, historical buildings or areas can be preserved. For example, the Seoul Metropolitan Government has been trying to designate Myeongmundang, the headquarters of a publishing company located in Anguk-dong, Jongno District, as a future cultural asset since 2012.

The building was constructed in 1967 during the Park Chung Hee regime in order to keep an eye on Yun Po-sun, who was the president of Korea before Park. Myeongmundang is located about 5 meters away from the residence of the former president. The publishing company purchased the building in 1970.

In order to designate Myeongmundang as a cultural asset, the city has been collecting the testimony of historians and former officials at the central intelligence agency to prove that the building was used for surveillance.

Seoul has seen a number of controversies over redevelopment and preservation.

One major case was the redevelopment project involving Pimatgol in 2003. Pimatgol was an old, narrow alley that ran parallel to Jongno in downtown Seoul.

During the Joseon Dynasty (1392-1910) it was used by commoners who wanted to avoid the yangban (aristocrats) riding by on horses, because the commoners had to kneel down whenever the yangban passed. Pima means avoiding horses and gol means alley.

Since the narrow alleyway was frequented by commoners, eateries serving hearty yet inexpensive food lined the street, but it has since disappeared due to a city development plan in 2009. Instead, skyscrapers now line the street.

In response, architect Lim Hyung-nam said, “Getting rid of that place was almost like the Taliban destroying the Buddhas of Bamiyan,” during an interview with Korea JoongAng Daily years ago.

A number of historical artifacts were unearthed during the course of the construction, and the findings were later placed in an excavated area that was covered with reinforced glass, located in front of a new 24-story multipurpose building. Old restaurants that had been operating in Pimatgol for more than 50 years were relocated into the new building, too.

“Seoul wants to register the city on the [Unesco] World Heritage List by saying that this is a 600-year-old city, but you know what the oldest relics are between Gwanghwamun Gate and Namdaemun Gate?” said Choi Ho-jin, the director of the National Trust Cultural Heritage Fund.

“A monument located in Gwanghawmun marking the enthronement of Gojong [the last king of the Joseon Dynasty] is the oldest wooden building, and the Ilmin Museum is the oldest modern building. On the iconic main road, nothing is older than 100 years old.”

Choi said redevelopment plans often win over preservation campaigns because the former is closely associated with economic benefit, but Choi said, “It is time to think about the value of this city.”

“Multiunit residential buildings and apartments will represent Korea if they keep making decisions like this,” he said. “And the biggest problem is our kids: They will know Pimatgol not as an old, narrow alley but as the modern building in which the remains of the original Pimatgol are in glass cases.”

However, the city has been trying its best to keep old Seoul alive through many ongoing projects, such as designating future cultural assets.

The owner of Myeongmundang requested that it be taken off the list, and the owner of Daeoh Bookstore, which opened in 1951 in Seochon, central Seoul, also asked the city to cancel its designation as a future cultural asset.

The building owners think the designation will present an obstacle when they want to sell their properties.

Even if buildings receive the designation, the city doesn’t provide any incentives or financial support for repair or maintenance of old buildings.

Kim, the former director of the National Museum of Korea, said the current system for future cultural assets needs to be updated by including incentives for building owners.

“We can’t really find value of the city in empty, dead palaces, but from a place that has human life in every layer of it,” added Choi from the National Trust Cultural Heritage Fund.