Foreign net buys in stocks and bonds increase in October

Foreign net buys in stocks and bonds increase in October 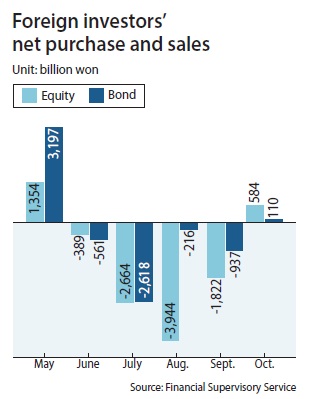 For the first time in five months foreign investors’ net purchases of stocks and bonds in October increased thanks to eased uncertainties in the Chinese market.

According to the Financial Supervisory Service on Tuesday, foreign investors last month net purchased 584 billion won ($499 billion) worth of stock, resulting in outstanding equities owned by foreigners of 441.8 trillion won.

Foreign investors now own 29.3 percent of stocks traded on the Korean markets. This is a slight increase from the previous month when they accounted for 28.6 percent.

The net purchases of stocks by foreign investors were a sharp turnaround from the 1.8 trillion won net selling made in the previous month. Foreign investors have been offloading their holdings since June when the Chinese stock market started to plummet, which was compared to the stock market crash in Wall Street in 1929 and 2000.

Americans still hold the largest amount of Korean stocks or 40.1 percent at 177.3 trillion won. British investors are the second-largest holders with 35.5 percent or 8 percent. Europe overall accounts for 28.2 percent or 124.5 trillion won.