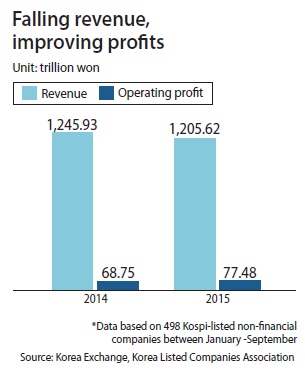 This means that large companies sold less and refrained from new investment, but profited by spending less, boosting productivity or selling properties.

According to the third-quarter performance compiled by the Korea Exchange and Korea Listed Companies Association on Tuesday, some 498 non-financial companies listed on the Kospi saw cumulative sales of 1,205.62 trillion won ($1.03 trillion) from the first through third quarters. This is 3.24 percent smaller than the 1,245.93 trillion won during the same period last year.

However, these companies recorded an operating profit of 77.48 trillion won, which is 12.69 percent larger than the same period last year.

This translates into the net sales-to-operating profit ratio of 6.43 percent, meaning that Kospi companies yielded 6.43 won after making sales of 1,000 won.

Excluding Samsung Electronics, which usually has high sales and recorded a 12.2 percent sales-to-profit ratio in the third quarter, the rest of Kospi-listed companies saw a less-steep reduction in cumulative sales but a larger operating profit.

Those 488 Kospi companies made a cumulative 1,058.28 trillion won over the first nine months of this year, down 3.13 percent compared to the 1,092.46 trillion won last year. The 488 companies together saw an operating profit of 57.2 trillion won, about 16.71 percent larger than the year before.

When it comes to net profit in the cumulative three quarters of this year, 394 out of 498 Kospi-listed companies achieved a net profit, while the other 104 companies saw net losses.

The smaller companies listed on the secondary Kosdaq market actually showed stronger performances than large companies in the third quarter.