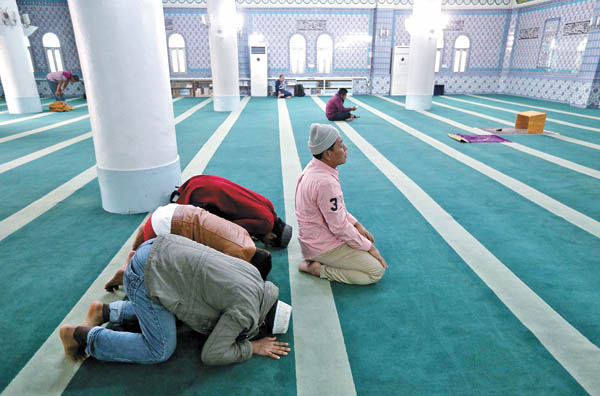 When Mr. Lee woke up Saturday morning to news that a series of terrorist attacks killed more than 120 people in Paris, he felt his own future was at risk. When French President Francois Hollande declared an “act of war” against the Islamic State (ISIS), putting full blame on jihadists for causing the worst terrorist attack in France in modern history, Lee was certain his life would never be the same.

Lee is a Muslim.

“I converted to Islam eight years ago,” says the 41-year-old, who has adopted the Muslim name Mohammed. “When I ride a taxi here in Korea, the driver notices I’m a Muslim and suddenly blurts out that ‘terrorism is wrong.’ I worry that people consider all Muslims terrorists.”

Korea has some 135,000 Muslims, including migrants, visiting workers and converts.

Lee claims he and his “brothers and sisters” are growing increasingly jittery about local media’s descriptions of ISIS, and how people are coming to conclude that a whole religion is synonymous with terrorism.

When an 18-year-old Korean vanished on Jan. 10 in Turkey, leading to speculation that he had intentionally traveled there to go to Syria and join ISIS, that anxiety reached its peak, local Muslims say.

Abdullaf, a 32-year-old Pakistani, says he stays off the streets when ISIS terrorist attacks make headlines because he worries that he may be the victim of a vengeful hate crime.

The National Intelligence Service believes the 18-year-old who disappeared in January joined ISIS and was possibly killed in Syria.

News reports about him probably began “Islamphobia” in Korea, says Lee Hee-su, a cultural anthropology professor at Hanyang University. “I’m afraid that [any anti-Islamic sentiment in Korea] might have a negative impact on the Korean Wave [of cultural exports such as films and music] being popular in the Middle East.”

In Nam-sik, a professor at the Korea National Diplomatic Academy, argues that Korean students need to be taught more about other countries and religions, and should be instructed that not all Islamic countries are heavily affected by ISIS. As examples, he cited Indonesia and Bangladesh.

“ISIS has nothing to do with Muslims,” says Khawaja, a 41-year-old Pakistani. “One-fifth of this entire world believes in Islam. If all of them were terrorists, we’d all be dead by now.”

Speaking after prayers Monday at the Seoul Central Mosque in Hannam-dong, central Seoul, Khawaja says he especially worries about his son, who attends school in Korea.

“It gets me that my 18-year-old son might be bullied at school,” he says.