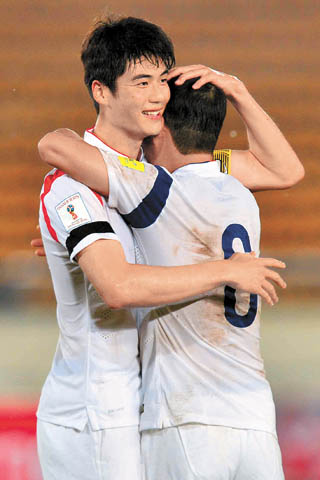 Team captain Ki Sung-yueng celebrates with Park Joo-ho after scoring his second goal of the match against Laos in their 2018 FIFA World Cup second round Asian qualifiers on Tuesday in Laos. [newsis]

The victory over Laos on Tuesday added to the list of records set by Korea’s national football team, and was especially meaningful for captain Ki Sung-yueng.

They also set a record with an 80 percent winning streak this year with 16 wins, three draw and one loss, the best performance since 1980.

While scoring 44 goals in 20 matches, Korea allowed only four goals. During 17 matches, the country hasn’t allowed a single goal.

This year, Korea gave up two goals to Australia in the Asian Cup final in January, and a goal to Uzbekistan in March and to Japan in August.

Though its opponents were usually Asian countries, this makes Korea the top country among the 209 FIFA members in terms of goals conceded this year, averaging 0.2 goals against per match.

Taegeuk Warriors captain Ki had his own record to celebrate after the Laos match.

For the 26-year-old Swansea City midfielder, this was the first time in his 80 international appearances that he scored more than one goal in a single match.

For Ki, this was his first run-of-play goal for Korea since a friendly against Senegal in 2009. The former Glasgow Celtic and Sunderland player has only scored on penalties since then. He has now scored eight goals for Korea.

“Ki has been a pivotal player for the team for a long time,” Stielike said on Wednesday in Laos. “After becoming a captain, he plays the game with responsibility and with more confidence than two or three years ago.”

Meanwhile, Stielike said the victory over Laos should seal Korea’s ticket to the final round of the regional qualifiers for the World Cup.

Korea has two more qualifiers at home against Lebanon and Kuwait in March and mathematically needs two points to enter the final round.

However, since Kuwait, which is currently second in Group G with three wins, one draw and one loss, has been banned by FIFA for government interference in its football association, their matches should be forfeited, Stielike said. The Middle East national was originally scheduled to play against Myanmar on Tuesday in Bangkok, but due to its situation, the match was postponed indefinitely by FIFA.