1. The 18th-century artist Kim Yoon-gyeom’s painting depicts Haein Temple (Haeinsa) surrounded by mountains, viewed from the opposite mountain. 2. Photographer Joo Myung-duck captures the solemn magnificence of the temple with a focus on Panjeon Hall, which houses the Tripitaka Koreana. 3. The findings on the arrangement of Haein Temple buildings are visualized through a three-dimensional model by Prof. Jeon Bong-hee and the Architectural History Lab of Seoul National University.[LEEUM, SAMSUNG MUSEUM OF ART]

Some old Buddhist temples in Korea have twin stone pagodas in their central courtyards, while others have single pagodas. It mainly depends on the lay of the land where the temples were built.

This is part of the new knowledge visitors can learn from an exhibition about the old and familiar architecture of Korea, which starts today at the Leeum, Samsung Museum of Art in central Seoul.

“The exhibition started from the Samsung Foundation of Culture’s project to publish a photographic collection of Korean architecture,” said Lee Joon, deputy director of the museum, at a press preview on Monday. 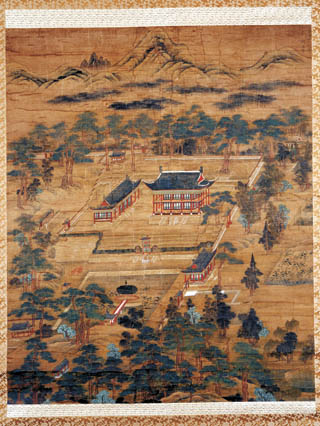 “But it is not only a photo exhibition,” he continued. “We have juxtaposed the photos of the old iconic buildings with the paintings of them by old masters, the old maps of the sites where they were built and their 3-D-scanned images and models of high-end technology.”

With all these artworks, artifacts and new models, the museum intends to “shed new light on wisdom in utilizing the land and the relationship between architecture and location,” he said.

“The principal difference between Western architecture and Korean architecture lies in interpretation of the site and the handling of nature,” he added. 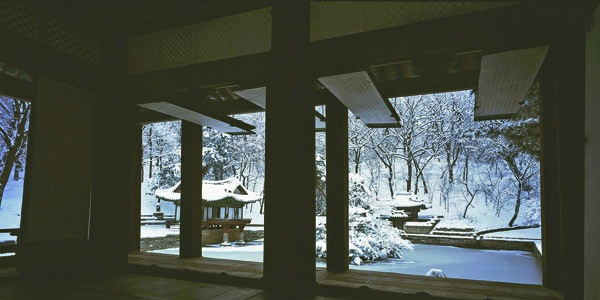 Bae Bien-u’s photograph captures the view of the pond in front of the library. [LEEUM, SAMSUNG MUSEUM OF ART]

For example, Bulguk Temple in the ancient city of Gyeongju, North Gyeongsang, has the famous pair of pagodas in its central courtyard, as it was built on a site which is comparatively flat. On the other hand, Haein Temple, well-known for housing the Tripitaka Koreana, has a single pagoda in its central court, as the buildings were arranged in a long, narrow site surrounded by mountains.

In the exhibition, the research on the arrangement of Haein and Bulguk temples is visualized through 3-D models by Prof. Jeon Bong-hee and the Architectural History Lab of Seoul National University.

At the same time, Joo’s photos of Haein Temple shows the solemn and spiritual beauty of the temple. And the 18th-century artist Kim Yoon-gyeom’s painting that depicts Haein Temple surrounded by mountains, viewed from the opposite mountain, helps illustrate the history and evolution of Korean architecture.

Part I of the exhibition focuses on religious buildings including Buddhist temples and Jongmyo, the royal shrine of the Joseon Dynasty (1392-1910).

And Part II features paintings and photographs of royal palaces, city walls and government office buildings. The highlights of the section include the 6-meter-wide “Donggwoldo,” or “Painting of the Eastern Palace.” and “Sukcheon Jeado,” or “Illustrations of My Places of Work,” produced by a 19th-century scholar-official Han Pil-gyo. It is the first time the book, preserved at the Harvard-Yenching Library, is on display in Korea.

The exhibition runs through Feb. 6. Admission is 5,000 won ($4.30) for adults. Admission for elementary, middle and high school students is free on weekdays. The museum is closed on Mondays. For details, visit www.leeum.org or call (02) 2014-6901.