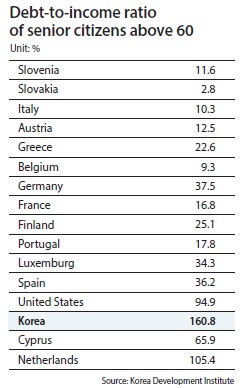 The average debt-to-income (DTI) ratio of Korean senior citizens above age 60 hit 161 percent, the highest among 16 major countries, according to a report by the Korea Development Institute (KDI) on Wednesday.

The aggregate DTI ratio used in the report compares all kinds of debt - including mortgages and credit card payments - to total assets.

In Korea, people aged 60 or older generally have a greater debt burden than younger age groups. It is also higher than in 15 countries that the study examined, including the United States, France, Germany and the Netherlands.

The average aggregate DTI ratio for the entire Korean population stood at 128 percent as of 2014, lower than for seniors, the report showed. Korea is the only country in which seniors have considerably higher debt ratios than younger people, according to the study.

Recent conditions in the financial market have made the situation worse for the elderly, said Kim Ji-seob, the author of the report.

“Low interest rates and deregulation of lending since 2006 have helped raise the aggregate debt amount among the senior population, allowing them to borrow beyond their financial capabilities,” Kim said. “Such market conditions are affecting the elderly more than the young.”

In the United States, people in their 40s are able to reduce their debt, while Koreans in the same age group cannot because they spend so much on their children’s education.

Korean senior citizens’ financial vulnerability is pointed out in the report. Stable income sources such as pensions accounted for only 29 percent of their income after retirement, far lower than 70 percent in Germany and the Netherlands.

In Korea, the debt level compared to financial assets of senior citizen households averaged 74 percent, higher than 50 percent in the United States. This means that senior citizens are more vulnerable to changes in market conditions, including interest rates.

One cause of high debt among seniors is loans that have to be paid off quickly, such as in two or three years.

“Because the maturities were short, they didn’t have enough time to save money,” Kim said. “They borrowed other money to repay current debt, which makes them fall into a vicious cycle.

“The government should consider reforming the structure of the lending system with a focus on increasing debt repayment capacity,” he said.