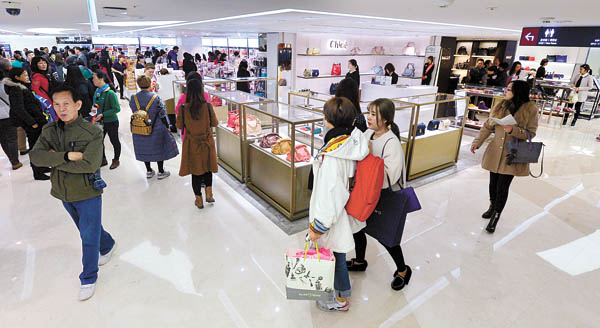 Tourists shop at the Lotte Duty Free in the retailers’ headquarters in downtown Seoul on Wednesday. Foreign tourist’s card spending has fallen to its lowest in two years. [NEWSIS]

The spending of foreigners via credit, debit and check cards in Korea has shrunk significantly, largely due to the Middle East respiratory syndrome (MERS) scare that occurred in the second quarter.

In fact, foreigners’ card spending in Korea was the smallest in more than two years. The last time spending dropped to a similar level was in the second quarter of 2013, when it totaled only $1.89 billion.

“It seems as though the spending cut was largely affected by MERs, which was at its peak in June,” said a BOK official. 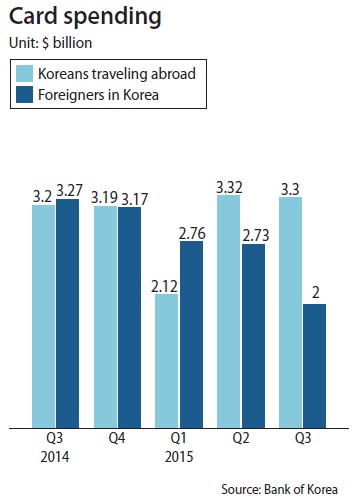 In fact, the number of foreigners visiting Korea in the third quarter fell 16.3 percent compared to the April-June period, from 3.47 million to 2.91 million. That’s a 28 percent drop from the 4 million visitors made during the same period last year.

Between January and September, an estimated 9.58 million foreigners traveled to Korea, an 8.4 percent drop compared to the previous year.

The number of Chinese tourists, who account for most of Korea’s visitors, fell 6.9 percent year-on-year during the same period.

The number of Japanese tourists, the second-largest group of visitors to Korea, fell 23.4 percent.

The number of American tourists, the third-largest group, fell 1.5 percent.

Korea’s situation is in stark contrast to that of Japan, which has seen an increasing number of foreign tourists, particularly from China, due to its weaker currency against the dollar.

According to the Japan National Tourism Organization, the number of people who visited Japan in the first nine months grew nearly 50 percent during the same period last year, but also reached a new record at 14.5 million and broke the previous record of 13.4 million held last year.

Thanks to the increase, earnings made off foreign tourists in the third quarter exceeded 1 trillion yen for the first time, hitting 1.9 trillion yen ? an 81.1 percent surge year-on-year.

The number of Chinese who traveled to Tokyo in September totaled 3.83 million, nearing the 4.36 million Chinese that visited Korea in the same period.

Considering that the number of Chinese who traveled to Tokyo has grown 100 percent compared to a year ago, it could be only a matter of time before more Chinese travel to Japan than Korea.

While foreigners’ spending in Korea has shrunk, card spending by Koreans overseas remained nearly the same compared to the previous quarter, dipping only slightly.

Korean spent a total $3.3 billion in the third quarter, which is a 0.5 percent drop from the $3.32 billion used overseas during the April-June period. When compared to a year ago, the figure grew 3.1 percent.

The number of Koreans traveling abroad has also surged in the third quarter, up 12.9 percent from the previous quarter to 5.02 million. It had dropped 5.3 percent in the second quarter compared to the first three months of the year, at 4.45 million.

Meanwhile, the number of cards used by Koreans overseas reached an all-time high at 9.54 million. This was a 1.3 percent increase when compared to the previous quarter but a 24.1 percent surge year-on-year. The central bank estimated that the reason for the sharp increase was largely because many Koreans abroad were using multiple cards.

Koreans spent a total $6.46 billion abroad in the second quarter, and 51 percent of that was charged to a card. Credit cards were the most-used method, accounting for 70.6 percent. Debit cards accounted for 4 percent, while check cards marked 25.4 percent.

While credit and debit cards were less-frequently used compared to the previous quarter, payments made via check cards have increased.