International friendly goes on in defiance of terror attacks

International friendly goes on in defiance of terror attacks 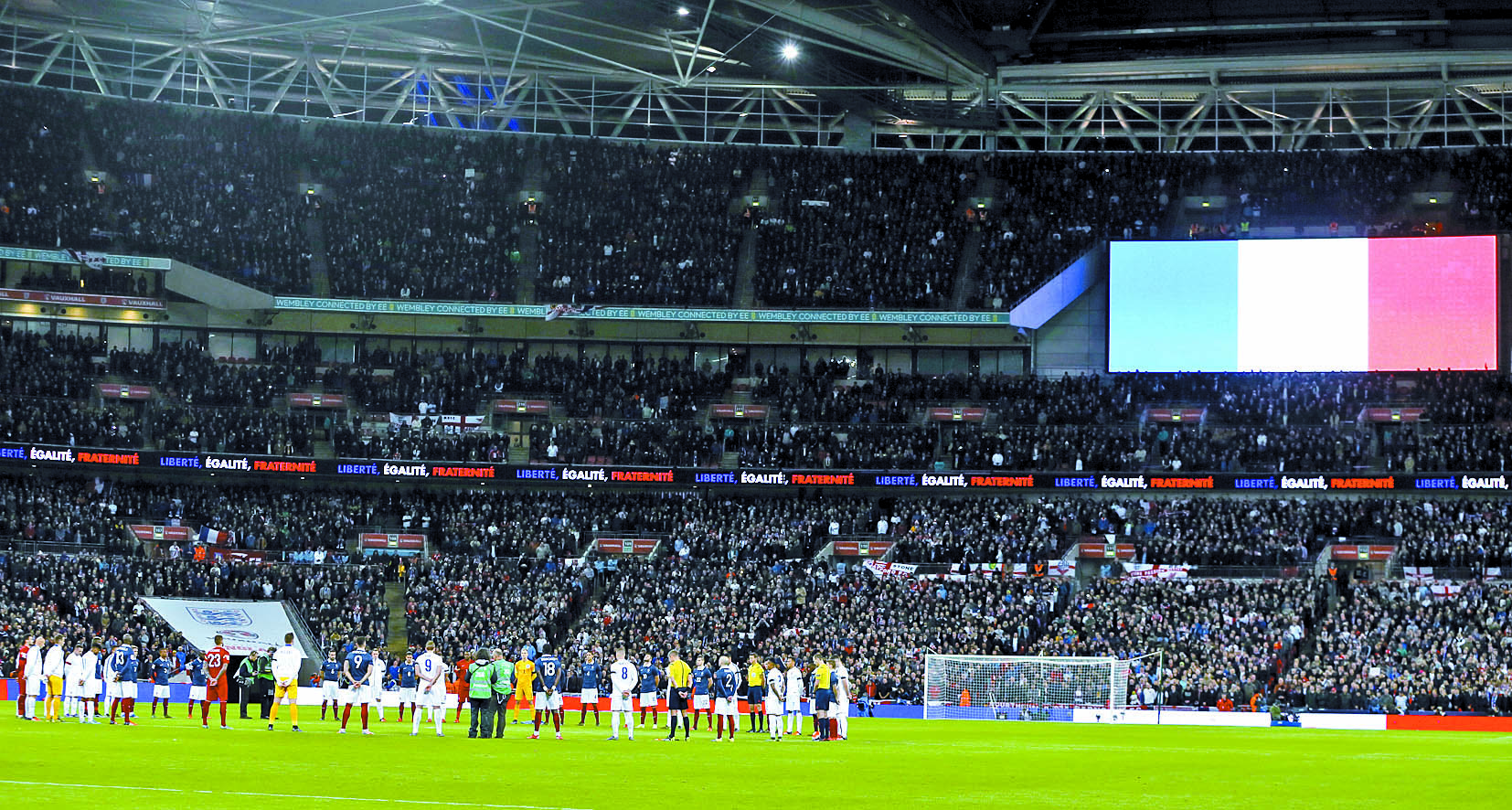 England and French players pay tribute in a minute of silence in memory of the victims of Paris attacks ahead of their friendly match at Wembley Stadium in London, Tuesday. [ap/newsis]

LONDON - Uniting in a symbol of defiance and respect, players and fans of the French and English football teams delivered a moving display of solidarity at Wembley Stadium on Tuesday at a friendly game staged four days after the deadly attacks in Paris.

A touching pre-game ceremony saw England and France supporters sing the French national anthem as one, before the squads came together around the center circle for an impeccably observed minute of silence in honor of the 129 people who were killed.

Social media was awash with praise for the dignified way a sensitive occasion was handled, while French sports daily L’Equipe’s Wednesday front page comprised a photo of the players observing the minute’s silence with the single word “Respect.”

Wembley’s iconic arch was lit up in the blue, white, and red of the French flag, while the French motto “Liberte, Egalite, Fraternite” was projected on the front of the national stadium.

England won 2-0, but rarely has the result of a football match - particularly one this prestigious - felt so irrelevant.

“This will be shown round the world and will show unity,” said England captain Wayne Rooney, one of the team’s goal-scorers. “Football is a global game and it is not about religion or race. We need to stand tall together in these tough times.”

“We wanted to play this match for all the people who have stayed in Paris, to pay homage and to honor the victims and their families,” Giroud said. “Everyone who played the match is a professional player. Even if it wasn’t easy, we had to do our job on the pitch.”

Prince William, who helped lay floral tributes beside the field, and British Prime Minister David Cameron, were among the 71,223 spectators at the game. ?

With a police helicopter whirring overhead and armed officers on patrol, England and France football fans had mingled outside the stadium in a calm pre-match atmosphere on a wet and windy evening in London. ?

“We have been welcomed here like it’s our own home,” Sebastien Correia, a train driver from the northern French city of Calais who was attending the game with nine friends, said. “That’s very important for us, for Europe, and for the world, for all the people who are fighting against dictatorships and terrorism. We need solidarity on a European and world level.”

France’s players were caught up in the attacks that ripped through Paris at several locations on Friday. Suicide bombers attacked the Stade de France, where France was playing Germany in a friendly. ?

France midfielder Lassana Diarra’s cousin was killed and France forward Antoine Griezmann’s sister escaped from the Bataclan concert hall where 89 people died. Diarra and Griezmann were among the 23-man squad that came to London, and both came on as second-half substitutes to applause.

Diarra lowered his head during the minute’s silence. Many France players, who had been told to play the game by the French Football Federation, looked emotional for what was the country’s first major public event since Friday’s atrocities.

Dele Alli and Rooney, with his record-extending 51st England goal, were the scorers for the home side. Yet, worldwide focus was not on the game or the result between two of the major powers in European football, but on what the occasion came to represent.

“It was a very poignant occasion, it was really everything I expected it to be,” said England coach Roy Hodgson, who likened the pre-game activities to a “remembrance service.”

Fans from both countries shared warm embraces outside the stadium, and some broke into a rendition of La Marseillaise as they walked up to the stadium. Some England supporters were wearing berets. Hours later - in another powerful moment in the pre-game ceremony - players from both teams stood side by side with their arms linked in front of photographers.

Mathieu De Bruyne, an engineer from Dunkerque, said he had brief doubts about coming to London for the game. “Maybe for two minutes, I thought to myself, `Should I go, should I not go?’ But I had to go. Nothing has changed,” he said. “You have to live like you live normally, go to the game, drink beer in the bar.

“Don’t show you are afraid.” AP