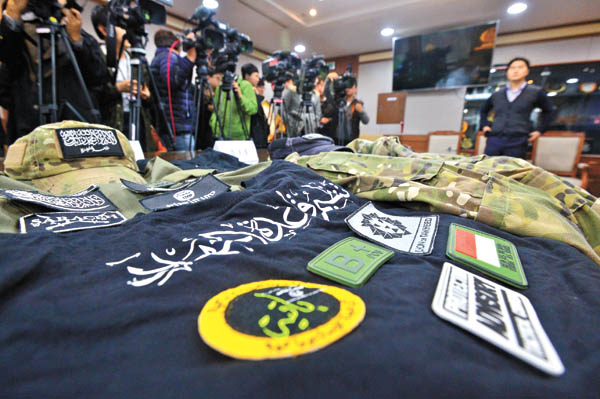 Korea deported 48 foreigners over the past five years after they were identified as members of terrorist groups, the country’s main intelligence agency told the National Assembly on Wednesday. The National Intelligence Service (NIS) briefed the National Intelligence Committee Wednesday afternoon, as Korea scrambled to beef up its security in the aftermath of last week’s attacks in Paris. Earlier in the day, the government and the ruling party held an counterterrorism consultation. The police also announced the arrest of a foreign worker who illegally entered Korea and is suspected of supporting a terrorist group in Syria.

One of the deported foreigners was a member of Hezbollah and frequently traveled to Korea by posing as a worker of a fertilizer company, according to the lawmakers. He purchased ammonium nitrate here and attempted to smuggle it to a third country, but was detected by the NIS, the lawmakers said.

The NIS also said one former foreign worker in Korea, an Indonesian, joined the Islamic State (ISIS), a terrorist group behind a series of deadly attacks including last week’s in Paris. 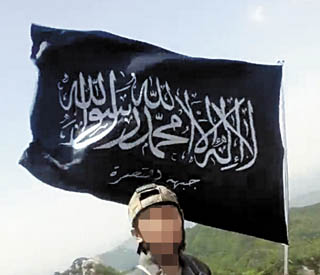 The suspect poses with the flag of the Al Nusra Front in a photo he posted on his social networking service profile. [NATIONAL POLICE AGENCY]

The Indonesian worked at a factory in Daegu for two years. He joined ISIS after leaving Korea and was confirmed to have died in February, the lawmakers said. A foreign intelligence agency informed the NIS about the case.

The NIS said 10 Koreans openly supported ISIS on the Internet. The NIS, however, failed to identify them as there was no legal way to track them down.

Since an 18-year-old Korean teenager joined ISIS after disappearing in Turkey near the border with Syria in January, the government stopped two more Koreans from leaving the country at the airport. They were also attempting to join the group, the NIS was quoted as saying by the lawmakers.

According to the lawmakers, NIS Director Lee said Korea must prepare for the possibility of an attack by a lone-wolf terrorist as more and more youngsters are showing interest in ISIS, as are Muslim workers in Korea.

“We agreed that the law is needed, but the opposition party’s concerns remain unchanged that the NIS may abuse its power, and the human rights of the Korean people could be violated,” said Saenuri Rep. Lee.

An counterterrorism bill was introduced to the legislature in 2001 after the Sept. 11 attacks in the United States, but it never passed. As of now, the country’s counterterrorism operations are managed by a presidential instruction issued in 1982.

Earlier in the morning, the government and the ruling party held a meeting to discuss counterterrorism measures and agreed that the immigration law should be reinforced to tighten entry into the country.

The Ministry of Justice will collect fingerprints from Koreans with foreign nationalities when they enter Korea, just like foreigners.

“The party believes security measures at other facilities such as express bus terminals must be improved,” Rep. Kim Sung-tae said. “Including this, the new counterterrorism budget will total 100 billion won.”

As of Tuesday 9 a.m., the government raised the terrorism alert level to “caution,” the second-highest warning in the four-tier system. Korea could be a target of terrorism after ISIS labeled it as part of the “crusader coalition.”

Meanwhile, the police on Wednesday arrested an Indonesian man who supported a terrorist group in Syria through posts on a social networking service.

The National Police Agency said that the 32-year-old man, who has been staying in Korea illegally, was arrested in South Chungcheong for violating the immigration law and document forgery. The police said the Indonesian man entered Korea in 2007 using a fake passport.

Over the past months, he promoted the Al Nusra Front, a terrorist group in Syria, in cyberspace by posting messages, including a video clip and a photo, the police said. After the Paris attacks, he wrote, “It is too much to pray for France when the attackers were not identified, while the world showed no response to the 400,000 deaths of Syrian civilians.”

The Al Nusra Front, sometimes called Al Qaeda in Syria, was established in 2012 under the directive of ISIS leader Abu Bakr al-Baghdadi but is no longer affiliated with ISIS. The United Nations Security Council designated it a terrorist group in 2013.