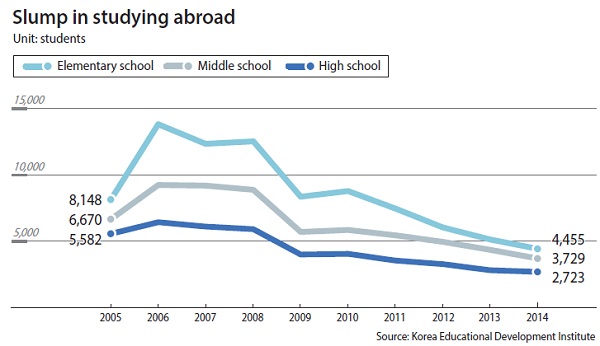 To Ms. Lee, a 39-year-old working mom, studying abroad seemed like the best way her two sons could get a good command of English. All her life, Lee had been told that the younger a child is exposed to an English-speaking environment, the easier it will be for them to become fluent.

But when Lee made plans to send her second-grade and fifth-grade sons to the United States last September, she heard a new tune sung by Korea’s contemporary “tiger moms.”

“People kept telling me that my sons would have a hard time catching up with mathematics and Korean when they return to Korea,” the affluent Seocho-dong resident said. That, they said, was much more important than English.

“I’ve switched my strategies for them,” Lee said. “They’re going to focus on math from now on because recent College Scholastic Ability Test trends have shown that getting a top score in that subject leads to getting into a top university.”

Lee’s two sons will study English at a hagwon [private cram school] during the school term and in an English camp during seasonal breaks.

The flood of Koreans going overseas for schooling has slowed to a trickle.

Data jointly compiled by the Ministry of Education and the Korean Educational Development Institute indicated Tuesday that 10,907 students - 4,455 from elementary school, 3,729 from middle school and 2,723 from high school - had left Korea in 2014 to study abroad. That’s 12 percent fewer than in 2013, when 12,374 Korean students did so.

Korean society ? including its colleges and companies - just isn’t so crazy about kids who studied abroad anymore. And the young generation is getting cosmopolitan enough by staying at home.

“There’s no guarantee that they’ll return and get into a top university or a well-paying company,” Jeon said. “The risks are way larger.”

“Up to seven or eight years ago, when the company selected new recruits for fields like overseas marketing, it preferred hiring applicants who had experience living abroad. But now, a lot of that distinction has blurred because local college grads show [similar levels of] foreign language skills and cosmopolitan outlook.”

In a survey last year by Saramin, another job site, 285 personnel officers were asked what specifications or achievements they “trust the least” on a resume. The experience of living abroad came second (13.7 percent) after academic background (22.1 percent).

Companies found that not everyone who lived overseas satisfied their expectations for foreign language skills.

Domestic universities have vowed to decrease the early admissions quota for applicants primarily chosen for their proficiency in foreign languages. Sogang University in Mapo District, western Seoul, for instance, has downsized that number from 89 in 2014 to 57 for the upcoming admissions, slated for March 2016.

“I tell others to send their kids abroad after they finish college,” said Ms. Lee, 47, whose son went to Canada in 2000 to attend public elementary school. “When he came back two years later, he couldn’t fit in.”